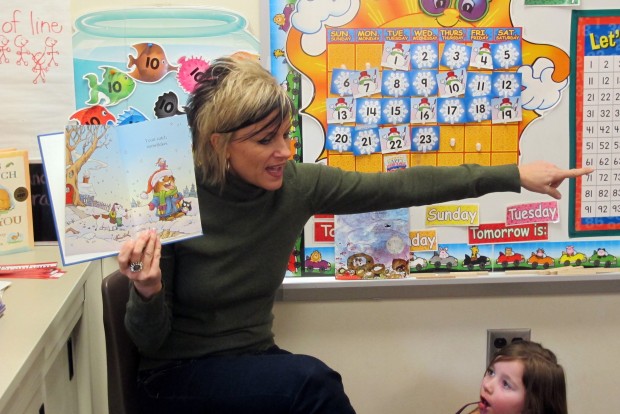 Lisa Coughanowr, a kindergarten teacher at East Side Elementary in Brazil, reads aloud to her students. She asks questions about the story to check their understanding. Kindergarten and first grade teachers are already using the new Common Core academic standards in their classrooms.

The Common Core is designed to increase the number of students prepared for college and career, but some parents and teachers say the new English language arts and math standards aren’t as strong as what Indiana had before.

“Our kids started coming with a curriculum that we didn’t think was going to make them ‘college ready’ — that’s the term everyone likes to use,” says Indianapolis parent Erin Tuttle. “It’s drastically different than what my older child had, and I found it to be less challenging.”

That’s why Tuttle approached Sen. Scott Schneider, R-Indianapolis, with her concerns about the Common Core. Schneider has proposed legislation to withdraw Indiana from the nationally-crafted academic standards adopted in 46 states.

The new standards are already shaping instruction for Indiana’s youngest students. Some kindergarten and first grade teachers really like the Common Core. But others say they’re a step back from Indiana’s current standards.

Why Some Educators Say ‘It’s Made Us Better Teachers’

Lisa Coughanowr and Hannah Reinoehl teach kindergarten at East Side Elementary in Brazil. They aligned their classrooms to the Common Core last year.

Coughanowr says she still uses many of the same activities she taught under the old state standards. But now story time is peppered with questions that check her students’ comprehension. 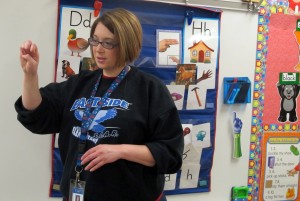 “What’s Mom bringing out?” she asks, reading aloud from a book about a snowy day.

The kids spy a steaming mug of cocoa on the page. “Hot chocolate!”

“Remember everything we can learn from the illustrations,” says Coughanowr.

Think of standards like a model skeleton. It’s up to teachers to assemble the bones and flesh them out. One of the kindergarten standards is to demonstrate a command of standard English capitalization and punctuation.

Coughanowr points to a sentence in the book she’s reading aloud.

“Can someone tell me what a sentence always, always starts with?” she asks.

Before, Coughanowr and Reinoehl used themes like transportation or food to help students learn shapes, sounds, numbers and colors. They pulled lessons from a textbook.

“If the standards fit, then that was good, and if they didn’t, we taught the theme,” Reinoehl says.

But now the teachers start with the Common Core and design their curriculum around the standards.

“That’s what drives our instruction,” says Coughanowr. “Everything that we plan, we plan around the standards. So maybe there’s not as much fluff as there used to be.”

Indiana had good academic standards before. But proponents of Common Core adoption say teachers weren’t always teaching to Indiana standards. That’s what was happening at East Side Elementary.

Reinoehl and Coughanowr say the new standards have forced them to drill into the topics they teach — and their students have risen to the challenge.

“Yeah, I think you could even go as far to say it’s made us better teachers,” says Coughanowr. “It’s made us understand the learning process a lot better.”

Schools across the state are implementing the Common Core in kindergarten and first grade. Audrey Fetters teaches at Flint Springs Elementary in Huntington. Like the Brazil teachers, she says the new standards have changed her kindergarten classroom. 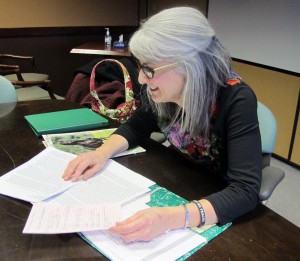 Audrey Fetters, a kindergarten teacher at Flint Springs Elementary in Huntington, flips through notes she took during a meeting on Common Core implementation.

“I’m very tied to the Common Core,” says Fetters. “Every decision I make about curriculum is based on the Core, what I need to teach them. We have a curriculum map.”

But Fetters strongly disagrees that the new standards have improved student learning.

“It’s a lot more regimented. There’s not as much teacher choice as there used to be,” she says.

Part of the problem is how the new standards are written. Fetters shuffles through her papers and reads the old Indiana standard for a skill taught in kindergarten, phonemic awareness.

Fetters says not only are the new standards confusing, they’re weaker than what Indiana had before.

“It’s pretty complex. If you just look at it, it could almost be overwhelming,” she says.

And it’s a lot for kindergarteners to take in. Fetters used to teach phonemes with arts and crafts, activities she says were developmentally appropriate for kindergarteners. She asked the school curriculum coach if she could still incorporate those lessons into the 90-minute literacy block that’s part of the Common Core.

“I’m not sure Common Core is the beast. I think the beast is a huge paradigm shift that happened somewhere along the way. In the last five years, it’s gotten crazy. I think technology gave us the ability to obsess over data.”
—Audrey Fetters, teacher

“If I’m blending, having them paint or cut or do this kind of thing, cut paper and make pictures that relate to letter sounds and word patterns? I was told I wouldn’t even get the paint out.”

The state is developing a new assessment based on the Common Core, and Fetters wants her students to do well on it. So she dropped the crafts.

“There’s all this talk of not teaching to the test, but how do you not pay attention to what’s on those tests if my evaluation, if my success as an educator is reflected by how they perform?” she asks.