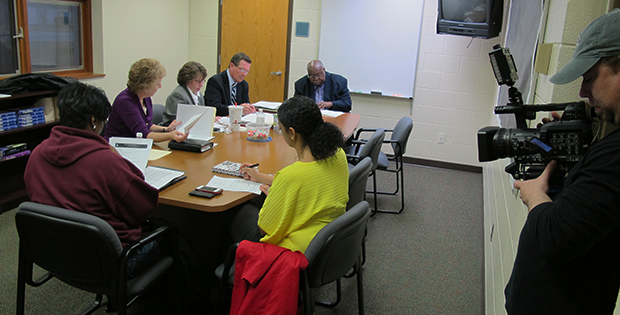 The Board of Directors for Timothy L. Johnson Academy, a charter school in southeast Fort Wayne, meets in a small conference room as a television camera looks on. Board members gathered to officially approve their decision to seek an appeal from Ball State University officials, who declined last week to renew the school's charter.

But you would hardly know it from attending the school’s board of directors’ meeting Tuesday night.

A few board members and reporters attended. One parent dropped in. Seated around a conference room table in a small room attached to the school’s cafeteria, Johnson Academy board members calmly, quickly moved down the agenda. They decided to move forward with an appeal of Ball State’s decision. Meeting adjourned.

“While I understand it may cause some short-term difficulty for families, it is a decision made in the long-term best interests of their students.”
—Bob Marra, Ball State University

He says the school’s staff does act with urgency daily out of a desire to help the school’s students, almost all of whom receive free or reduced price meals. Nickelson says Johnson Academy’s students have not succeeded in other school settings.

“There is a need for a safety net. Someone has to fulfill that,” Nickelson says. “Yes, we’d all like for our schools to do extremely well and for the bottom to be as good as the top. But there is a bottom. Someone has to care for it. We’re that people. We care.

“Every day we run the risk of losing our children,” Nickelson adds. “Every day, somebody in my community dies at the hands of another child. Every day, there’s something going on that makes us realize how important we are. Every day, we hear from parents.”

Johnson Academy is one of seven charter schools from which Ball State University decided to pull its sponsorship last week.

Though Johnson Academy’s passing rate on statewide tests increased by more than 13 percentage points last year, only four in ten of the school’s students passed both portions of the ISTEP. After two consecutive B’s, the school received a D on the state’s letter grading scale last year.

The head of charter schools at Ball State told StateImpact last week that all of the schools had the opportunity to present additional information about student performance before university officials made their decisions.

“While we prefer to see these schools succeed, we have determined that their current success or progress isn’t sufficient for seven of our schools. It is our responsibility to not renew the school, which usually leads to closure. While I understand it may cause some short-term difficulty for families, it is a decision made in the long-term best interests of their students,” wrote Bob Marra, Ball State’s executive director of the Office of Charter Schools, in a statement last week.

Nickelson’s statement that his school acts as a refuge for students who haven’t found a home in traditional public schools sounds similar to the sentiments supporters of the ill-fated Indianapolis Project School voiced after Mayor Greg Ballard’s office shut that school down this summer.

But Alex Medler, a vice president of the National Association of Charter School Authorizers, told StateImpact’s Elle Moxley after the Project School closure became final that the decision to shut down charter schools is not one that’s taken lightly.

“The existence of a traditional school that is worse is not a good reason to keep a bad charter school that’s not meeting standards open,” Medler said in August.