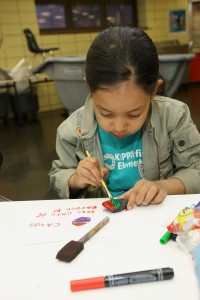 A charter school student participates in an art project.

Several of the charter schools that received non-renewal notices from sponsor Ball State University Tuesday plan to appeal the decision.

Others will ask one of the other charter school authorizers in the state — there are several — to keep the school open for the 2013-14 academic year.

The Office of Charter Schools at Ball State had until March to renew the charters of 20 schools it sponsors. But executive director Bob Marra says his office wanted to give charter school families more time to consider their options.

‘That’s why gave out this decision [now] — so they’d have time before next school year opens,” says Marra.

Charters are public schools that operate independently of local districts with permission from an authorizer like Ball State. For years the university and the Indianapolis Mayor’s Office were the two main sponsors in the state, but legislation passed in 2011 allows more authorizers to approve schools.

But finding another authorizer may be a hard sell for some of the schools, all of which received D’s or F’s in the state accountability system last year. Ball State will continue to sponsor other charters that received the same letter grade, but those schools were given shortened three-year contracts and must meet certain performance conditions to keep their charters.

The decision to close so many schools — previously, Ball State had pulled the plug on just one charter, in 2004 — comes right after Stanford released a study leveling criticism at the authorizer for allowing low-performing schools to stay open.

Marra says Ball State has been working with the National Association for Charter School Authorizers to improve standards for the schools it sponsors. NACSA released a statement Tuesday praising the authorizer for making “thoughtful decisions” about which schools to close.

But it’s not clear yet what will happen to the seven schools whose charters will end June 30. Here’s what we know so far about each school:

Charter School of the Dunes, Gary

Danielle Sleight, president of the school board, told StateImpact Indiana the charter plans to appeal Ball State’s decision. Schools have 10 days to file appeal with the university.

Charter School of the Dunes broke ground on a new, $13 million building last summer. Sleight told the Associated Press last week that the charter school was operating in black but she wasn’t sure what would happen if Ball State pulled its sponsorship.

A message posted on the school’s Facebook page says the governing board is still evaluating its options.

Parents told Fox 59 that the charter feels like a neighborhood school because so many kids in the community attend it.

“I’m very disappointed,” Elmo Portee Sr. told The Journal Gazette. “We’re going to have to do some quick thinking for that next step. We’ll have to find somewhere else for him to go,” likely another charter or private school.

But public schools in Fort Wayne, where three of the seven schools are located, are already preparing for an influx of charter students, according to the Fort Wayne News-Sentinel.

Chief Academic Officer Kevin Handley told the Associated Press the school plans to appeal Ball State’s decision. The school had previously received A’s from the Department of Education, but slipped to an F this year after the state changed how schools are graded.

The school used to be aligned with KIPP, a network of college preparatory charter schools. But American Quality Schools has run LEAD for the past two years. Thomas says the school is trying to be as transparent as possible about the school’s future with parents.

“We’ll appeal the decision and seek other sponsors, but there are no definites,” says Thomas. “We want them to make the best choice for their students. That after all is the whole point of charters.”

School board president Michael Nickleson hopes the charter can find a new sponsor. The school received a D from the state this year.