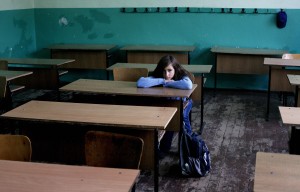 Special education advocates urged state lawmakers Wednesday to adopt formal rules governing the use of seclusion and restraint in schools.

Dodson testified in favor of Sen. Randy Head’s proposal to require schools develop seclusion and restraint policies. She says school districts need to notify parents “in a reasonable timeframe” if their children are restrained or sent to a seclusion room to cool down.

Sen. Luke Kenley, R-Noblesville, wanted examples of schools with good seclusion and restraint policies. “Does this work, in a practical sense?” he asked.

Cathy Pratt thinks so. She’s the director of the Indiana Resource Center for Autism. Pratt says educators and classroom aides need tools to help them work with students with special needs because the wrong approach can escalate challenging behavior.

“I want you to understand. The kids that we’re talking about are not the children who come in one time carrying a gun,” says Pratt. “These are kids with significant disabilities who have challenges and limitations and who exhibit challenging behaviors because of those limitations.”

But Frank Bush, executive director of the Indiana School Boards Association, questioned whether every school district in the state needs its own policy.

“What kind of policies on restraint would a virtual school need?” he asked.