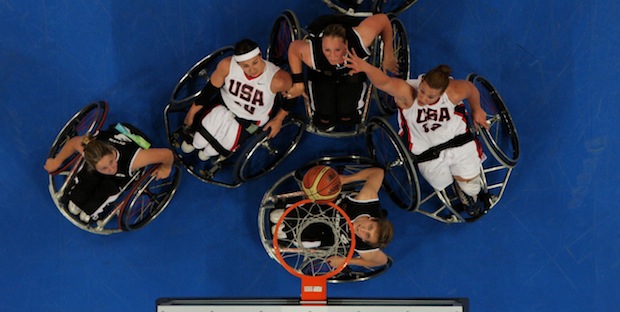 Players reach for a rebound during the gold medal Wheelchair Basketball match between the U.S. and China in the 2008 Paralympic Games in Beijing.

But the guidance — which some advocates likened to Title IX’s expansion of women’s athletics — also touched off debate over whether federal officials had overstepped their authority.

“The Obama Administration invents a right to wheelchair basketball,” blogged Mike Petrilli, executive vice president of the conservative Fordham Institute, saying the feds had created a burdensome, unfunded mandate for the nation’s schools without Congressional approval.

“If the federal government insists on creating a ‘right’ to these types of programs, the correct place to do that is on the floor of the House and Senate—not in the bowels of the U.S. Department of Education.”
—Mike Petrilli, Fordham Institute

Federal officials told EdWeek that the new guidelines — which urge schools to “ensure equal opportunity for participation” — do not constitute a new mandate.

“The guidance does not say that there is a right to separate sports programs such as wheelchair basketball,” department spokesperson Daren Briscoe told Politics K-12‘s Michele McNeil. “Rather, the guidance ‘urges’—but does not require—that when inclusion is not possible, school districts find other ways to give students with disabilities the opportunity to take part in extracurricular athletics.”

U.S. Secretary of Education Arne Duncan expounds in a post on the department’s Homeroom blog:

Federal civil rights laws require schools to provide equal opportunities, not give anyone an unfair head start. So schools don’t have to change the essential rules of the game, and they don’t have to do anything that would provide a student with a disability an unfair competitive advantage. But they do need to make reasonable modifications (such as using a laser instead of a starter pistol to start a race so a deaf runner can compete) to ensure that students with disabilities get the very same opportunity to play as everyone else. The guidance issued today will help schools meet this obligation and will allow increasing numbers of kids with disabilities the chance to benefit from playing sports.

“Nothing frustrates me quite as much as well-intentioned people ignoring reality and sparking massive unintended consequences in the name of ‘doing the right thing.’ Well, here we go again,” blogged the American Enterprise Institute’s Rick Hess.

I would vote for candidates to public office who would provide funding for “inclusive athletics” and would be proud if my sons’ schools offered such programs to their special-needs students. Yet boggles my mind that the Obama Administration, without an ounce of public debate or deliberation, without an iota of Congressional authorization or approval, could declare by fiat that public schools nationwide must provide such programs or risk their federal education funding… The right place to hash out these concerns is in school-board meetings, not in Washington. And if the federal government insists on creating a ‘right’ to these types of programs, the correct place to do that is on the floor of the House and Senate—not in the bowels of the U.S. Department of Education.

The guidance certainly doesn’t mandate specific sports for specific disabilities. But his point is well taken. The Education Department document does strongly indicate that students with disabilities have the right to access separate, competitive sports leagues that can accommodate their disability, whether at school or in the community. And the burden is on schools to make that happen.

Reuters talked to a student-athlete with a disability who welcomed the guidance:

Casey Followay, a 15-year-old high school track athlete confined to a wheelchair by a birth defect… has to race on his own under current rules.

“This will help me become a better athlete conditioning- wise, because I have something to push for,” said Followay, who filed a complaint with the U.S. Office of Civil Rights in 2011 asking that he be allowed to run alongside, but not against, the able-bodied.