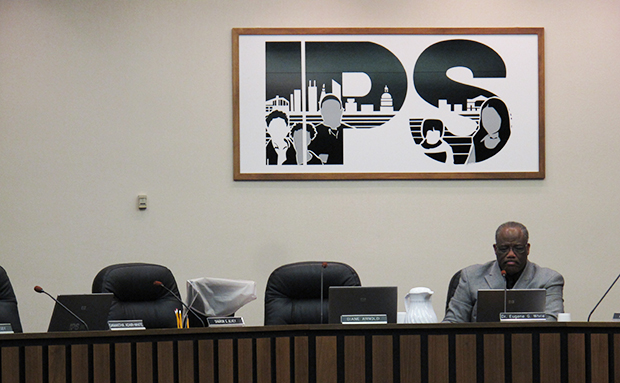 Indianapolis Public Schools Superintendent Eugene White prepares for Tuesday night's school board meeting, at which he later announced his retirement.

Indianapolis Public Schools Superintendent Eugene White will step down on April 5 after more than seven years at the district.

White presided over IPS during a period when test scores generally improved and gains in the district’s graduation rate outpaced the rest of the state. But he also found himself at odds with state policymakers who orchestrated the takeover of four district schools with chronically low test scores.

In the interests of avoiding a protracted battle over his severance pay, school board president Diane Arnold says IPS will pay White for the remaining time on his contract, which runs until June 2015 — a buyout that could cost the district as much as $800,000.

“It was Dr. White’s choice [to retire] and the board wanted to honor that choice,” Arnold said after the meeting. “We’re very grateful for his leadership, we think there’s been a lot of progress, but this is a new board. He’s been very gracious and understanding that new boards have new visions and new directions.”

White, who was a finalist for open superintendent positions in Alabama and South Carolina last year, says this was a “heartfelt decision” he made on his own.

You might remember White from his notable quote to StateImpact that he didn’t want to be “kicked around” in the process of state officials taking over four Indianapolis schools — T.C. Howe, Arlington and Manual High Schools, along with Emma Donnan Middle School.

On Tuesday, White told StateImpact he felt the state takeovers are a minor part of his legacy:

A few reactions from Twitter — including from an NBA player:

BREAKING NEWS: Eugene White is stepping down as superintendent of @ipsschools, district says.”

Eugene White’s tenure as @ipsschools Superintendent was a time of many challenges and successes. I appreciate his service to our community. — Mayor Greg Ballard (@MayorBallard) January 16, 2013

Methinks that Dr. Eugene White might catch some hell over his retirement payment.

Eugene White’s tenure a mixed bag at IPS. Good in early years, but too defensive of status qou lately

…and a perspective from a longtime White critic.