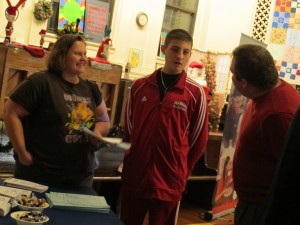 Jason Breeding (center), a freshman at Emmerich Manual High School, and his mother Shelly Breeding speak to a representative of Charter Schools USA, the company taking over the school in July.

The district may be losing four schools to state takeover next year, but Indianapolis Public Schools administrators are doing everything they can to make sure IPS doesn’t lose those schools’ students too.

Superintendent Eugene White says IPS is transferring all district-funded activities at the takeover schools to buildings the district still controls.

“Not only are we taking the programs, we want to take the students too,” White says, adding “We want to compete for those kids because no other school district in the state of Indiana provides as many quality educational options as IPS.”

This message doesn’t always play well with the families at takeover schools. Some parents interpret the IPS sales pitch — sometimes delivered by teachers directly to students, parents say — as unnecessary pressure for kids.

“The kids don’t need to deal with that, they need to figure out what’s going on in the classroom and not deal with all this grown-up political crap,” says Shelly Breeding. Her son Jason is a freshman at Emmerich Manual High School, which faces state takeover in July. 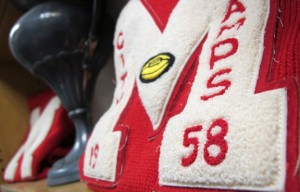 A Manual High School football letter from 1958. The district cut the sport in 2009 after a lack of competitive success. The school's turnaround operator, Charter Schools USA, is vowing to restart the program.

Charter Schools USA, the company operating Manual next year, will replace most district programs with its own equivalents next year. It will also offer a full slate of extracurricular activities, including football — which the district cut in 2009.

But takeover companies might not be able to replicate the district’s offerings for reasons beyond their control. For example, the hard-to-come-by military contract for the JROTC program at Manual High — which has a history almost as old as the 116-year-old school — is with IPS, not the school.

Jason, who spoke to StateImpact at an informational meeting put on by Charter Schools USA, says he was one of many students with misconceptions about the takeover process, at least at first.

On December 5, a group of Manual alumni sent a letter to the Indiana Board of Education, stating their concerns about the takeover process. Their letter, among other things, mentions the district’s direct encouragement of students to transfer to other IPS schools.

The letter prompted state superintendent Tony Bennett to raise the possibility of cutting the district’s funding if the takeover at Manual did not go smoothly.

“This board does have the authority to act if the school district engages in actions that are adverse to the management team. That action can include withholding funds. There is nothing off the table,” Bennett said at the December 7 board meeting.

Superintendent Eugene White says the district will be cooperative, but says he resents the implication that Indianapolis Public Schools is acting inappropriately. He says the district is acting well within the law by moving programs to other schools and offering families more educational choices.

“If I decide that I have to take my programs with me, then it’s not Eugene White not playing ball, it’s other people not understanding what the law says. And I don’t think that’s my problem,” White says.