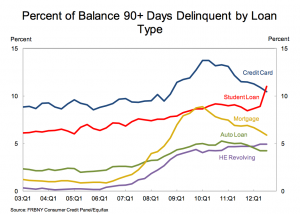 More borrowers are delinquent on their student loans than on their credit cards, as this graph from a New York Fed report shows. Click on the image to enlarge it.

More borrowers are falling behind on their student loan payments than on their credit card payments for the first time since at least 2003, a report released this week from the Federal Reserve Bank of New York shows.

Catherine Rampell has the story at Economix:

Bucking this trend is student loans. Student loan debt has been growing every quarter since at least 2003, the earliest data included in the report. And delinquency rates look worse than previously believed.

11 percent of student loan debt is now more than 90 days delinquent, the report finds. Americans also took on more student loans than any other kind of debt in the third quarter — more than credit card or auto loan debt combined.

But this milestone, “may be misleading, though,” writes Rampell — the report may understate the delinquency rates on student loans. That’s because many of these loans are in a grace period or forbearance, so they’re not being paid back.

“This implies that among loans in the repayment cycle, delinquency rates are roughly twice as high,” the Fed report adds in a footnote.

But as our colleages at StateImpact Florida note, not everyone’s alarmed by the current debt levels. Look at the big picture, says Ed Moore, the president of Independent Colleges & Universities in Florida.

“Student debt [has] remained relatively constant as a percentage of the total American debt. It’s not as scary a picture as some would believe,” he told StateImpact Florida.