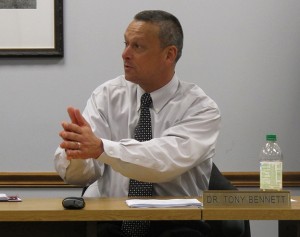 State superintendent Tony Bennett speaks during the State Board of Education's meeting in October.

After months of debate, sweeping changes to the state rules governing how Indiana educators earn licenses and certifications could get a final up-or-down vote from the State Board of Education later this week.

(Bear with us, non-wonky readers. We’re about to get wonky. But this is a pretty big deal.)

Known in shorthand as “REPA II,” state education officials have advocated for the changes as a means of providing more flexibility to administrators in the teacher hiring process.

Debate over the proposal has been contentious. Opponents fear the rules would “de-professionalize” Indiana’s teaching ranks. They’ve called for the State Board to table REPA II out of deference to state superintendent-elect Glenda Ritz, who also opposes the proposed changes.

But on Friday, state education officials also unveiled several changes to the proposal — which doesn’t require a General Assembly vote to become official policy — that dial back a few of REPA II’s most controversial points.

Upon cursory first glance, a few of the changes — as outlined by Indiana Department of Education officials here — stick out:

Changing the teaching experience prerequisite will open access to school administration to license holders with higher education experience. The elimination of the Ed.S. degree for superintendent licensure will open up access to district leadership positions while maintaining a level of preparation and academic credentials commensurate with the responsibility and authority held by a superintendent. For those uniquely qualified individuals who may not hold graduate degrees but who have the knowledge, skills and experience for school or district administration, a local school board may apply for a Temporary BLA or Temporary Superintendent license.

A word about procedure: REPA II is being considered through the executive rule-making process. It’s a lengthy process, requiring an executive agency to publish proposed rule changes well beforehand, allowing for a period of public comment. After the executive branch department makes changes, state officials change the proposal based on the comments and put the changes to an executive panel — in this case, the State Board of Education, for a vote.

Here’s the Indiana Department of Education’s outline of the proposed changes: