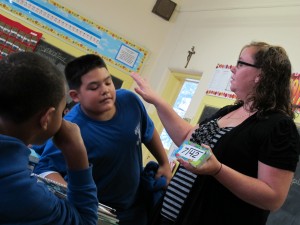 Heather Snavely asks a student to stay seated while playing math games in her classroom at Our Lady of Hungary Catholic school in South Bend. More photos after the jump.

If Indiana’s voucher program helps fuel a population boom like it did at Our Lady of Hungary Catholic school, small private schools ought to take a cue from principal Melissa Jay:  get on good terms with your textbook company.

Our Lady’s seen a 60 percent spike in enrollment this year alone, the first year for the vouchers. That’s meant Jay’s gone back to the textbook company three times for more books.

For just three books? No.

“Three additional shipments of boxes of books,” Jay says with a characteristic laugh.

Jay laughs a lot when the vouchers or the school’s enrollment jump comes up in conversation, mostly out of what seems like disbelief. Our Lady of Hungary’s turnaround has been remarkable:

In 2009, the diocese was considering closing Our Lady — a small, aging parish and K-8 school in a working class South Bend neighborhood. Families panicked, and enrollment dropped to 92. But fundraising and outreach bumped enrollment to 134 last year, and with the help of the state’s voucher program, the school’s nearly full with 211 students this year.

Our Lady also is an example of why public school advocates are panicked about what effect the program could have on the education landscape. After all, funds for vouchers (as much as $4,500 per scholarship) are funds taken away from a public school, whose costs — voucher opponents point out — do not change incrementally every time they lose or gain a student.

Jay says the school paid for mailers to the community to advertise the eligibility requirements, partially as a way of landing families who had already expressed interest in Our Lady, but might not have been able to pay. Even then, Jay says there were parents who were willing to pay anyway, but were also eligible for the vouchers.

Now Jay’s in an unfamiliar position:  With some grades full at 25 students, she may actually have to turn away families.

We’ll continue our look at the Indiana voucher program with more posts through this week. What are your thoughts about the program?