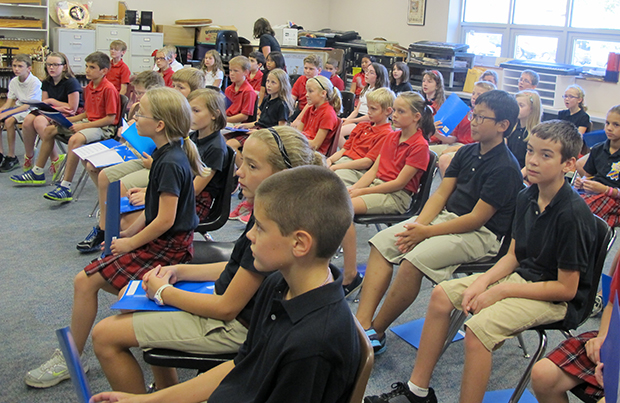 The Indiana Department of Education has issued more than 8,000 vouchers for students to attend private schools at the state’s expense. That’s twice as many as the IDOE issued last year, but only about half of the number available.

About 300 Indiana private schools accept the vouchers, and some have seen tremendous enrollment growth as a result of the state’s choice scholarships. But large gains may not be the norm. Many of the state’s private schools will only be able to accommodate a handful of voucher students before they reach capacity.

Why Some Indiana Parents Are Picking Private School

Take a tour of St. Charles Catholic School in Bloomington, and Principal Alec Mayer will tell you the students sell the school to prospective families.

“It’s safe,” says Mayer as he pokes his head into a quiet second grade classroom. “We have discipline and structure. We have good curriculum.” 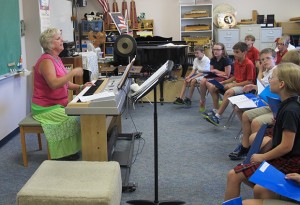 Mayer loves showing off St. Charles. His two favorite rooms are music and art. Students are polite as they greet Mayer in the hall on their way to choir practice. As soon as the fifth graders are seated, their teacher leads them in a hymn.

It’s the first year students have attended St. Charles with the help of choice scholarships from the state. Mayer says enrollment is up, but not by much.

“In a school with 458 students, fifteen voucher students isn’t that much of an impact at all,” says Mayer.

St. Charles serves students in kindergarten through eighth grade. Mayer says the school is about 85 percent Catholic. Almost all of the voucher students the school has accepted are also Catholic. That’s because tuition is about $4,000 for Catholics and $6,000 for non-Catholics. So students who get vouchers but aren’t Catholic end up paying about $1,500 a year.

How One St. Charles Family Qualified For State Vouchers

“It’s not a battle for me. The whole purpose behind it is so parents can have a choice. I’m not a salesman. I’m a school principal.”
—Alec Mayer, St. Charles principal

All families get a discount for enrolling multiple students. Still, the cost can add up. Erin Lemrow teaches French at St. Charles. About a year ago she made the difficult decision to pull her five kids out of the school they’d always attended because the family couldn’t afford the tuition.

“Tuition got a bit costly for us. We’re a large family, a large Catholic family, so we went ahead and tried out public school,” says Lemrow.

But Lemrow says her kids had trouble adjusting to public school. Their classes were bigger, their friends were still at St. Charles. The school wasn’t working, so she started looking at other options.

That’s when Lemrow discovered that because she had sent her kids to public school for a year, they suddenly qualified for the voucher program.

“When we found out that part of being eligible for a voucher program meant having come from a public school, we just couldn’t believe it,” says Lemrow. “We were overwhelmed with happiness, just really happy we could come back to St. Charles as a family and not just have me working here alone.”

There was space in every grade for Lemrow’s kids at St. Charles. But Principal Mayer says that might not always be the case.

The school can only accept 50 students per grade, and some classes are nearly full. Mayer doubts he’ll have space available as the current kindergarten class ages through the school. He says the school doesn’t have plans to expand.

“Even if I have 25 extra third graders who wanted to come in and I was already at capacity of 50, we wouldn’t take them,” says Mayer. “We just don’t do that.”

Why Indiana May Have A Capacity Problem In The Future

But some say capacity at the state’s existing private schools will become a big problem in Indiana. Robert Enlow is president of the Friedman Foundation, a national school choice advocacy group based in Indianapolis. He says most of Indiana’s private schools will soon reach capacity, but the current maximum voucher is too low to attract new schools to the state. 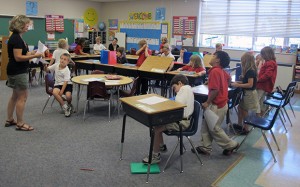 Students at St. Charles Catholic School in Bloomington prepare for a lesson on Thursday, Aug. 23, 2012.

“There were at least three private school groups that offer high quality options for families in other states that wanted to come in, but they couldn’t come in at $4,500,” says Enlow.

Enlow says if the state offered more like $6,000 per voucher, then it could encourage more private schools to open in Indiana. He says about 85 percent of the families who took advantage of the program last year qualified for free or reduced lunch. That means they’re likely priced out of schools where tuition is more than the cost of a voucher.

“We need to make sure we have enough dollars eligible particularly for low income families to access all the choices that are available,” says Enlow. “We don’t want to advantage one choice over another a choice frankly and we’re doing that a little bit by having a $4,500 cap.”

Still, Indiana’s program is considered by many to be the most expansive in the country — beginning next year there’s no limit to the number of vouchers the state can issue.