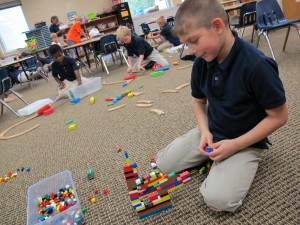 A student plays with Legos at Christel House Academy, a charter school on Indianapolis' south side.

But that pay gap has shrunk since 1995, when the average non-profit education employee made $15,000 less than their average government counterpart.

Grønbjerg, a faculty member at IU’s School for Public and Environmental Affairs, heads a project studying non-profit entities in Indiana.

“I think there’s concern about whether or not tuition levels have become so high that that may have a dampening effect at private, non-profit colleges,” she says.

The report looks at employment, not student enrollment. The IU professor adds she’s sure the numbers underestimate the growth in non-profit education entities because the data don’t always include, for example, some religious schools operated under the auspices of a local church.