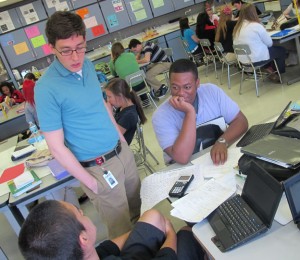 Evansville science teacher Brian Bennett speaks with students in his chemistry class. Outside of class, students watch video lectures Bennett records, allowing them to do their homework with Bennett's guidance in class — the so-called "flipped" model.

When high schoolers in Brian Bennett’s chemistry class need a refresher on the ideal gas law, they don’t call for the teacher — they pull up a video of the teacher.

“Remember n equals moles,” Bennett reminds his students in a video he made weeks earlier — one of dozens he’s produced for his science classes.

Bennett uses the videos as part of his “flipped classroom,” an instructional model that turns traditional teaching tactics upside down. Teachers in flipped classes send students home with videos of lectures they’d normally hear in class, freeing them to use class time to personally assist students with assignments.

As the model slowly gains traction in classrooms in Indiana and nationwide, the Evansville high school teacher has emerged as a leading proponent for “the flip.” (Bennett will be a keynote speaker at next week’s Flipped Conference in Chicago.)

“The problem I see right now is that the mainstream idea of the flipped classroom is that we can just throw a video in and it works — that video is this magic thing,” Bennett says. “But it’s too simplistic. It’s not realistic. And it looks like bad teaching.”

Who Flips, And Why

After being developed by individual teachers for years, the flipped classroom is now being implemented on a broader scale with the backing of Indiana education officials — and state dollars.

In March, the Indiana Department of Education awarded a $200,000 innovation grant to the Richmond Community Schools to help 15 teachers flip their classrooms next year. District officials estimate the move will impact roughly 200 students.

Plymouth Community Schools received a similar grant in 2011 and another $100,000 in grant money this year.

“Technology is in the hands of the students almost 24/7,” Tidrow says.

Students see a big upside to having video lectures available online. The videos become living reference materials, they say, accessible at any time.

“If we’re just sitting at home and we can’t remember something that [the teacher] said, you can just look it up again,” says Evansville sophomore Adam Bennett (no relation to his chemistry teacher, Brian). “If you have any more questions, he answers them in class anyway.”

Salman Khan demonstrates how he records virtual lessons — instrumental in the "flipped classroom" — for CBS's 60 Minutes.

While StateImpact found two of the Indiana teachers who have flipped their classrooms using videos they made themselves — we profiled Indianapolis’ Troy Cockrum last year — the name you’re most likely to have heard associated with the flipped classroom is The Khan Academy.

In March, CBS’ 60 Minutes profiled the not-for-profit company, which makes online video curriculum, and its namesake Sal Khan. Videos on the company’s YouTube channel have been viewed more than160 million times, and Khan Academy’s website has gotten more than 40 million visits from the U.S. alone in the past 18 months, CBS reported.

“We’re trying to take the passivity out of the classroom, so that teachers have more flexibility,” Khan told interviewer Sanjay Gupta.

Bennett agrees students should take an active role in their education. But he tells StateImpact he sees the flipped classroom at its best when teachers are creating content themselves, rather than using generic materials:

I see turning all the instruction over to Khan Academy as the same thing as buying an instructional program from a company and just handing out worksheets. Me making the videos is personal, because I know what my kids need. If we’re working on a concept, and they need extension on it, I’ll go and I’ll make a new video and it will fill that purpose. Will I use that video next year? Probably not. With something prepackaged like Khan Academy, exclusively Khan Academy, they might not do that extension, they might not do that revision, which is a problem. Because if we’re not revising, we’re not going to be able to grow each individual student in the way they need to be grown.

In his 60 Minutes interview, Khan said teachers take an active role in instruction even if they aren’t creating the content themselves.

“We kind of view teachers playing the role of more like a coach or a mentor. Which, once again, I personally believe is a much higher valued thing than a lecturer,” Khan said on CBS. 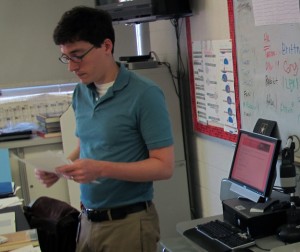 “The video in a flipped classroom needs to be the spice and not the main course. We can’t just replace a teacher with video.”
—Brian Bennett, Evansville teacher

Teachers who’ve flipped classes with their own videos say creating the lectures can be a labor- and time-intensive process. But Bennett says software to create the video lectures is becoming much easier to use.

Richmond’s Rob Tidrow says teachers should be actively involved in creating the content. As he said in an interview with StateImpact:

Our teachers know the students the best, and they know how to structure their lessons accordingly. We’re not removing the teacher from the equation at all…  We also want that teacher to be familiar with that lesson. The next day when the student comes in, they’re going to have questions. Hey, I saw at minute three, you talked about this concept, can you expand on that? We want the teacher to be aware of what the lecture is.

Generally, though, not everyone’s sold on the idea of the flipped classroom. Because it relies on students having access to technology at home to watch the videos, The Hechinger Report writes the model hasn’t crossed the socio-economic digital divide, remaining far more popular in wealthy schools than in poorer ones.

And — as some critics have told us — there are educators who don’t like the idea that the flipped classroom is becoming popular just because it features “something shiny” like online videos, without elevating good pedagogy.

Indeed, Bennett says the flipped classroom has to put quality instruction first if the model is to become anything more than a fad.

“We’ve got to move away from video as the key thing,” Bennet says. “There has to be good teaching behind it still.”

What do you think of the flipped classroom? Have you seen it in your school? Would you like to see it in your classroom?