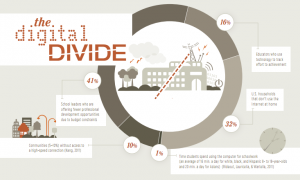 As Indiana’s K-12 education officials ponder new ways to engage students online, a national teaching and education policy group came out with a stark reminder: Nearly one-third of all U.S. students do not use the Internet at home.

Take a look at this infographic from the group, called ASCD, which released a report on how educators can deal with the divide between the digital haves and have-nots.

The digital divide once indicated a division between those who had access to technology—especially high-speed Internet—and those who did not, but now, experts say, the digital divide is actually more complicated than previously thought.

Data released by the U.S. Department of Commerce found that Americans in lower-income and rural areas have access to Internet connections; however, those connections are slower than is required to download web pages, photos, or videos, while wealthier neighborhoods have faster Internet connections

Many of those talking about online learning these days seem to have forgotten what it’s like to have to go somwhere to get online, or to consider home Internet access an afterthought instead of a precondition. Or they think everyone has an iPhone.