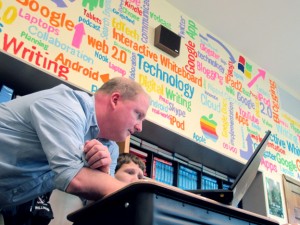 Troy Cockrum, an English teacher at St. Thomas Aquinas Catholic school, helps a student having computer issues. Cockrum "flipped" his classroom this year, and painted the walls of his classroom with tech-savvy terminology to reflect the new change.

As long as there have been teachers, they’ve battled the same problems: How can they reach students of multiple ability levels at once, cover more course material in limited time, and find more time to engage with students one-on-one?

Some educators think they’ve found a solution to all three problems in, of all things, YouTube.

A small group of teachers nationwide is replacing in-class lectures with short online videos students watch at home. This flip-flop of homework and lecture — from which the model gets its name, “the flipped classroom” — leaves class time open for students to complete their assignments with their teacher standing by to offer one-on-one help.

Research backing the model is scarce, and some critics have dismissed the model as a gimmick. Still, a handful Indiana teachers — and top state education officials — are willing to give it a try.

The Indiana Department of Education is backing trials to see if the model can work in the state’s public schools. John Keller, the department’s assistant superintendent for technology, says state officials want Indiana “to be seen as a place where innovation happens in schools,” and is looking seriously at the flipped classroom as part of a broader push towards that goal.

(Read also: Why education technology may have to wait for the mainstream a bit longer.)

“We’ve heard about kids powering down when they come to school, and so any model that has a potential for increased engagement, for the relevance of school to increase for kids, I think that’s something that demands a second look,” Keller says.

While the number of teachers across the country who have flipped their classrooms is hard to pin down, nearly 2,000 teachers have joined a nationwide online social network for those interested in embracing ‘the flip.’

“Several teachers I’ve talked to say they’ve run into the same problem: If you’re not prepared for it, you run out of stuff to do, because you’ve never been able to deliver that much content in a year.”
—Troy Cockrum, teacher who flipped his seventh grade classroom

One of those is Troy Cockrum, a middle school English teacher at St. Thomas Aquinas on the north side of Indianapolis, who first saw a video this winter — yes, on YouTube — of the two Colorado teachers who pioneered the flipped classroom five years ago.

“[The video] just struck a chord with me,” Cockrum remembers. He did some research into flipped classrooms, and decided this year to give the method a try.

This year, he’s flipped two of his classes, with the initial goal of finding a way to make the most of his school’s short class periods. He posts five-minute lectures he records at home to Google videos and his YouTube page, instructing students on how to write five-paragraph essays, identify parts of speech, and use punctuation.

An example of a video Cockrum posts to his YouTube page.

Cockrum says the videos have enabled the dynamics of his class to change in several ways: He says his students can work at their own pace on writing projects during class, and he’s available to help them individually as they have questions or ask for an edit. Cockrum says he anticipates this will let him cover a lot more curricular material over the year, as well as immerse students in the writing process.

Cockrum adds this year has been his hardest since his first year of teaching — partially because he has to track each student as they work on their own projects, and partially because “the flip” requires a different set of classroom management skills.

Keller says the method is not likely to become a predominant educational method anytime soon. That’s because, he says, the flipped classroom is most effective in the hands of the right teachers and administrators.

Other educators worry the flipped classroom may not actually make bad teaching better. New York teacher and education blogger Frank Noschese criticizes the model as a rebirth of the filmstrip teacher — “except now the students just watch the filmstrip at home.”

Noschese says he likes how Cockrum runs his flipped classroom, praising his use of Google Docs on laptops in the classroom as “something [students] couldn’t do before.” But the YouTube lectures aren’t all that different from sending kids home with reading out of a textbook, Noschese says.

“I get annoyed when I see bad pedagogy held up as good pedagogy only because it involves something bright and shiny like technology or online videos. It’s hailed as this revolution, and it’s more of the same stuff that hasn’t been working for kids in the first place.”
—Frank Noschese, science teacher and education blogger

He says if teachers want to engage kids in class, they should be thinking of activities to eliminate traditional classroom lectures altogether. Noschese also worries the model poses an “equity issue,” as not every student has the internet at home.

Cockrum says he knows a few parents who have had to upgrade their internet connections so their students could watch the videos, and he admits access may not be as large of an issue because he teaches at a private school.

But Cockrum says if access were truly an issue, he would send students home with DVD’s of the videos. He says the purpose of the flipped classroom is to free up time for direct interaction with the student — not to engage them through personalized YouTube videos.

“The key piece is the classtime and the one-on-one instruction I can do with each kid,” Cockrum says.