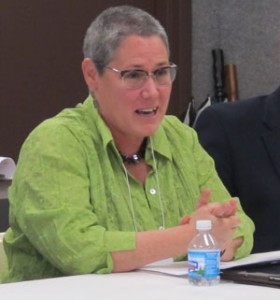 Lee Heffernan, a literacy coach in Monroe County Community Schools, speaks at an April 14 forum about the IREAD-3 exam in Bloomington.

Two students were crying on the day of the big test, recalls Bloomington teacher Lee Heffernan.

“I don’t want to fail third grade,” one of them sobbed, Heffernan says. The students all knew about the IREAD-3, the test of their reading skills that made its statewide debut this year.

What these students didn’t understand was that this “big test” was simply the ISTEP, which had no power to hold them back.

The IREAD-3, which could, was still weeks away. But the students, Heffernan remembers, couldn’t tell the difference.

“It was an indicator of how confusing it must be for these little people,” she says. “They’re taking this big ISTEP, they’ve heard about this other test, they don’t know which is which.”

“At home, the conversation might be about ‘You won’t go to fourth grade if you don’t pass this test. Get in there and do it.’ That is really difficult.”
—Cathy Diersing, IU adjunct professor

On The Front Lines

As a literacy coach in Bloomington’s highest poverty school, Fairview Elementary, Heffernan is one of the educators on the front lines of preparing students for the IREAD-3 — likely one of the highest-stakes tests Indiana students will take in their early academic careers.

Students who didn’t pass the reading skills exam in March and don’t pass a retake this summer have to take all third grade-level standardized tests next year, likely delaying many of those students entry into fourth grade.

State officials say the decision on whether to keep students who don’t pass in third grade classrooms ultimately rest with the districts. But some district officials and at least one state lawmaker question the legal basis for the state’s policy, as StateImpact reported Wednesday.

Teachers did their best to frame the IREAD-3 in a positive light for students, Heffernan says. Rather than dire warnings about the gravity of the test, the message students have heard is “You can do this, you’re awesome,” as Heffernan puts it.

Heffernan also echoes what officials in her district and others have said: She and her peers in Monroe County Community Schools didn’t change the way they taught reading, but they did “have more conversations” about how children were doing.

Like many other districts in Indiana, Monroe County Community Schools put greater focus on “diagnostic assessments.” As we reported in January, these tests help serve as a “temperature check,” determining which children are in need of extra help ahead of the IREAD-3.

“How do you help kids know that this is another way that we find out what kinds of things we can do and need to do, when at home, the conversation might be about ‘You won’t go to fourth grade if you don’t pass this test. Get in there and do it.’ That is really difficult,” Diersing said in January.

“The success,” Diersing continued, “is in becoming the reader,” not passing the IREAD-3.

‘We Are Readers, We Are Writers’

We’ve written before about the debate over holding back third graders who have trouble reading. Supporters say a similar policy is working in Florida to boost long-stagnant fourth grade reading scores.

But Heffernan says she doesn’t like the policy, saying most of her colleagues believe holding back students often does more harm than good.

“It’s a big identity issue,” Heffernan says, explaining every elementary teacher has to get a simple, but critical message across to students: the process of learning and learning to read is important.

“That’s a big part of an elementary school teacher. ‘We are learners, we are readers, we are writers,'” she says. “The more you reinforce to kids, ‘Look, you’re reading; look, you’re writing; we’re readers and writers together,’ the more they take it on as, ‘I can do this.'”

“It’s kind of harmful to a kid’s identity to say, ‘Well, you weren’t really a reader or a writer, you aren’t going to be a fourth grader.'”

Heffernan, though, says she has confidence most of the students in her school will be able to pass after an intensive summer remediation program. According to the Bloomington Herald-Times, 19 percent of Fairview Elementary third graders did not pass their first IREAD-3 attempt in March.