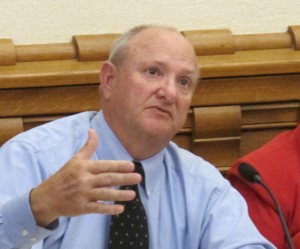 The chairman of the Indiana Senate’s Appropriations Committee says state education officials are out of bounds in using a bill he sponsored in 2010 as the legal basis for a controversial statewide reading test, the IREAD-3.

State Sen. Luke Kenley, R-Noblesville, says the General Assembly wanted to make “a strong statement that reading was important,” yet sought to avoid creating a single test to judge whether a student could be held back.

But that’s exactly the fear of many parents, teachers, and district officials: if the Indiana third graders who failed the IREAD-3 in March don’t pass a retake this summer, the state will require these students to take third grade again.

“I would just put the Department of Education and the State Board [of Education] on notice that they’re clearly not in line with the words in the statute so they’re opening themselves up perhaps to a lawsuit or a complaint by somebody on those grounds,” Kenley told StateImpact.

“It gives [schools] a tool they never had to go to a parent and say, ‘Look, we’ve always known this kid can’t read. Now we’ve got something that can prove it.’”
—Stephanie Sample, IDOE spokesperson

Kenley’s comments highlight, at minimum, the confusion surrounding the IREAD-3. Other state lawmakers and district-level educators have echoed Kenley’s comments, saying it’s inappropriate for a single test administered by the state to determine whether students get held back.

State education officials, however, maintain they are not requiring students who fail the IREAD-3 to take third grade again. They want district-level officials to have the power to make that call, Indiana Department of Education spokesperson Stephanie Sample says.

But the state will require third graders who do not pass the IREAD-3 after two attempts to take third grade-level statewide tests next year. In other words, Sample says, the school has the power to decide whether to promote the student to a fourth grade classroom, but the student will still have to take both the ISTEP and the IREAD as a third grader.

In 2010, tucked into some other school finance language in House Enrolled Act 1367, the Indiana General Assembly unanimously passed a measure calling on state education officials to craft robust reading standards for Indiana students.

The language they settled on calls for holding students back “as a last resort.”

The executive branch always gets to decide how legislative actions get put into practice, however. In this case, the law empowered the State Board of Education — an executive panel, chaired by state superintendent Tony Bennett, whose members are gubernatorially-appointed — to decide how to implement the law. Here’s the key portion of the rule they adopted:

Beginning with the 2012-2013 school year, retention of a student in grade 3 if the student does not achieve a passing score on the IREAD-3 assessment during the previous school year or during a subsequent attempt at passing IREAD-3.

In this case, Kenley says state education officials have overstepped. He told StateImpact:

At the time we developed the statutory language, we had a detailed discussion of this point [retention]. And the legislators agreed that this language was the most appropriate language, it was a strong encouragement to make sure everybody can read, but not an absolute statement that if you can’t pass one specific test, you can’t be promoted on, because we know there would be individual cases where this situation would have to be modified…

I think [the State Board of Education’s] sense is that it’s so important to have the reading skills that they think maybe an absolute standard is permissible. But that is not what the legislature decided to do in the language that we put there. So we may not have a difference of opinion in terms of how important [reading skills are], but I think in terms of executing this, through the processes, I think we have a little different understanding of how much you can do. 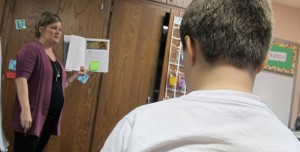 There are exceptions to the rule for English language learners and students with, as the rule terms it, “disabilities.” In those instances, the student’s academic record would be reviewed in a case conference that wouldn’t necessarily conclude with the student’s retention.

“It gives them a tool that they never had to go to a parent and say, ‘Look, we’ve always known this kid can’t read. Now we’ve got something that can prove it. We think the best recommendation is for this kid to stay in the third grade classroom, because that’s where we can provide him the instruction he really needs,'” Sample says.

The state will release the first round of IREAD-3 results later this month.

StateImpact will have more on the IREAD-3 throughout the week. We’ll hear from more parents, state officials and educators about what happens next. What do you make of Kenley’s remarks? Or the state’s response? Share your thoughts in our comments section.