President Barack Obama speaks in the East Room of the White House in September, rolling out a plan to waive key provisions of No Child Left Behind for states that apply.

When President Obama announced a plan in September to allow states to apply for waivers from key requirements of the No Child Left Behind law, he took a shot at Congress.

“I’ve urged Congress for a while now — let’s get a bipartisan effort, let’s fix it [NCLB]. Congress hasn’t been able to do it, so I will,” the President said.

It’s a line President Obama could easily use in a re-election campaign should he choose to run based on what lawmakers didn’t do during his tenure.

If he does go down that path, the administration’s waiver plan — in the face of Congress’ stalled re-writes of the unpopular No Child Left Behind law — would be a logical talking point for the President’s election-year State of the Union address Tuesday night.

To be fair, left-leaning groups may share some of the blame for Congress’ alleged foot-dragging with the right-leaning lawmakers leading the House.

But while polls suggest an overhaul of NCLB is overwhelmingly popular, the New America Foundation’s Jennifer Cohen says ‘No Child’ is one more issue over which President Obama can lament partisan gridlock on Capitol Hill.

“We’ve basically found out we’re at a time in politics when education is no longer a bipartisan issue,” says Cohen, an education policy analyst. She says education issues should “figure prominently” in the President’s address.

With the number of U.S. schools failing to meet lofty progress goals outlined under NCLB believed to be on the rise, the Obama administration says — as most now do — the 2001 law is outdated. Two efforts to fix the law in Congress this year have fizzled.

In response, Secretary of Education Arne Duncan announced federal officials would offer the waivers as a remedy to state education departments. Duncan says if state officials can come up with a better way to narrow the socio-economic achievement gap while still holding schools accountable for their progress and performance, the feds won’t hold the state to NCLB’s “Adequate Yearly Progress” benchmarks (which isn’t all good, writes Title I-derland).

“The tradeoff is raise a high bar, hold folks accountable for results, but give them a lot more autonomy, and be a lot less prescriptive, a lot less top-down,” Duncan told StateImpact Ohio in September.

Eleven states have already applied for waivers — Colorado, Florida, Georgia, Indiana, Kentucky, Massachusetts, Minnesota, New Jersey, New Mexico, Oklahoma and Tennessee. Officials in other states, such as Ohio, have said they will submit their own applications by mid-February.

The waivers are already intertwined with some states’ education policies. Indiana’s NCLB waiver, for example, outlines changes to the state’s rating system for schools in language similar to a bill now awaiting a vote in the state legislature.

Republicans have criticized the waivers as part of what they see as a move by the administration to circumvent Congressional authority.

As Mike Petrilli notes on the Flypaper blog, a spokesperson for a high-ranking GOP representative says some Republicans “remain concerned about any initiative that would allow [Duncan] to pick winners and losers in the nation’s education system.” 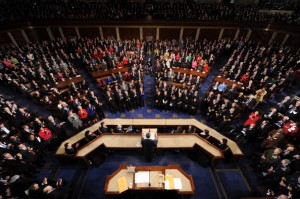 President Barack Obama delivers his 2011 State of the Union Address.

Why Waivers Could Be Important For Obama

Beyond concerns over the implementation of the program, some Republicans have criticized President Obama’s waiver program as a breech of executive authority. But New America’s Jennifer Cohen points out, the waivers wouldn’t exist if Congress had already acted to reauthorize NCLB.

“Offering waivers is the most they can do to get out of some really punitive measures” in the current law, Cohen tells StateImpact.

Cohen says Mr. Obama might consider featuring the waivers in his State of the Union address as an example of acting unilaterally to fill a void of congressional action, although she doesn’t believe the President will specifically target Republicans — “Obama’s M.O. isn’t with direct shame,” Cohen adds.

Aside from the waivers, President Obama could also highlight the competitive grant money his administration offered to states through programs such as “Race to the Top.” Both Florida ($700 million) and Ohio ($400 million) received grants through the program. Indiana withdrew its application. Cohen says the administration sees such grant programs as “quintessential Obama initiatives.”

But many education policy observers expected an overhaul of the NCLB law “was the one thing that was going to come out of this Congress,” Cohen says, which could make the waivers a particularly powerful point for the speech.

On the other hand, Paul Bruno writes on This Week in Education, NCLB waivers might not be a winning issue for President Obama:

Obama is almost certainly worried about re-exciting his base after what have been, for progressives, three often-unsatisfying years.

The progressive educators who should partially constitute his base are already very unhappy with Obama’s Race to the Top and NCLB waiver policies and pushing the administration’s stated ESEA [“the Elementary and Secondary Education Act,” the legal name for NCLB] agenda isn’t going to assuage their concerns.

President Obama asked Congress to pass a bipartisan reauthorization of the law. But it never happened, and now the administration is moving ahead with a waiver package that Obama’s own secretary of education thinks is stronger than any of the legislation under consideration. So, if I were a betting woman, I’d guess there won’t be much talk about NCLB this time.

The President will deliver his State of the Union address at 9 p.m. Eastern Time Tuesday. Indiana Governor Mitch Daniels will deliver the Republican response.