President Barack Obama speaks in the East Room of the White House in September, rolling out a plan to waive key provisions of No Child Left Behind for states who apply. The AP reports Indiana's waiver application will win the federal government's stamp of approval today, along with 9 other states.

The Obama administration has granted Indiana’s request for a waiver from key requirements of the No Child Left Behind, officials announced Thursday.

State education officials will replace AYP with what they call an “ambitious and achievable” goal of their own. Every Indiana school must earn a state letter grade of an A — or failing that, improve two letter grades to earn no worse than a C — by 2020.

The waiver application state officials submitted in November reads both like a primer on Indiana’s efforts to overhaul education, and like a game plan for big changes to state education policy that are still to come, including a more aggressive timeline for state intervention in failing schools.

Remarkably, one of those big changes spelled out in the waiver application — a reworking of the metrics state officials use in handing out the state’s school letter grades — passed Wednesday morning, one day before the Obama administration’s announcement.

Indiana education officials say they’re confident their plan is a better way to hold schools accountable for the test scores of their students than ‘No Child’s’ AYP system. The state’s school grading system incorporates measures unrelated to testing into school letter grades, such as a high school’s graduation rate. 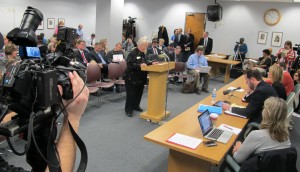 Testimony before a State Board of Education hearing in Indianapolis in January. Roughly 70 people attended the public hearing. Most who spoke opposed changes to the state's school letter grading system. One state board member was present.

Support for the state’s new grading system, though, has been hard to find — even among state education officials’ traditional supporters. The Indianapolis Star‘s Scott Elliott points out:

During public testimony last month, a wide spectrum of educators and education-focused organizations opposed the rules, including such rare allies as the state’s urban school association and chamber of commerce. The chief complaints were that the new rules were too complex for schools and parents to understand and that a particular growth measure was potentially unfair to schools.

As we’ve reported, federal education officials echoed the concerns of civil rights groups who felt the ‘No Child’ waivers undercut the intent of the original law — to close the socio-economic achievement gap.

In addition to Indiana’s waiver, federal education officials approved applications from Colorado, Florida, Georgia, Kentucky, Massachusetts, Minnesota, New Jersey, Oklahoma and Tennessee. New Mexico’s was the only waiver applications among the first round of requests which officials denied.