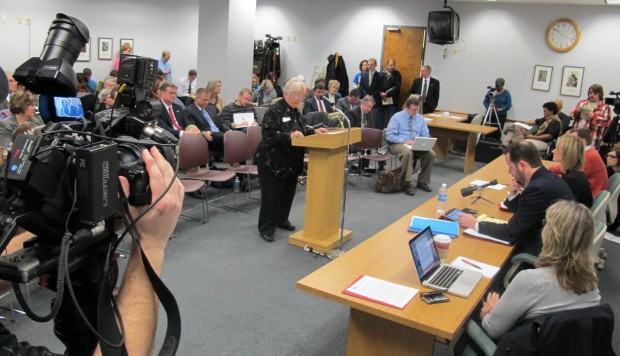 Shirley Wright, executive director for the Indiana Middle Level Education Association, testifies before a State Board of Education hearing in Indianapolis on Tuesday. Roughly 70 people attended the public hearing. One state board member was present.

Opponents of a rule that could put 105 schools in jeopardy for state intervention or takeover next year voiced their displeasure Tuesday at a public meeting in Indianapolis before the state executive panel behind the proposed change.

One member of the Indiana Board of Education was present at the hearing for a proposed rule to speed up Indiana’s timeline for state intervention in the worst-performing schools.

Roughly 70 other people attended the hearing, including parents, representatives for statewide interest groups, and Indiana Department of Education staff.

If passed, the proposed rules would enable the state to take over or intervene in any school that had received an F for four consecutive years. It currently takes six consecutive F’s to initiate the intervention process. The rules would also allow any combination of D’s and F’s for five straight years to start the takeover process.

Criticisms — and critics — varied widely. Among them:

The four-person panel presiding over the hearing — which included State Board member Jo Blacketor and the Indiana Department of Education’s chief accountability officer Jon Gubera — did not answer criticisms, but accepted documentation from those who offered testimony.

Indiana Department of Education officials defend the proposed rule as relying on multiple measures — not just test scores, but rates of participation on state exams, improvement in performance, and even high school graduation rates in some measures. The rules also eliminate an unpopular ‘AYP cap’ from the current letter grading system.

“We don’t really as adults have the time to say ‘let’s compromise their educational experiences.’ So we’re going to push for improved accountability standards in the General Assembly, and we hope to provide proactive interventions sometime in the future,” state superintendent Tony Bennett has said. He did not attend the hearing.

The proposed rule also ties into the state education officials’ goal of having all schools earning A letter grade ratings from the state by 2020.