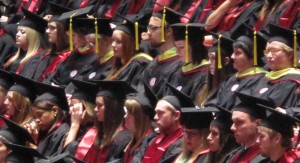 If Indiana’s public universities are engines of the state’s economy, the fuel doesn’t always stay here.

One in three graduates from Indiana’s public colleges left the state — and the ones with the most advanced degrees were the most likely to leave — according to a study from Indiana University and the Indiana Workforce Intelligence System. The report tracked the payroll records of students who graduated in 2000 with various levels of education to determine what percent remained in the state after five years in the workforce.

“These figures document a significant net loss of human capital from the state,” the study’s authors write.

The highest rates of “brain drain” can be found in sparsely populated rural areas like Crawford and Floyd County. In some cases, fewer than a quarter of students originating from these communities remained in the state after receiving a post secondary credential. The study concludes higher levels of education equate to a lower likelihood of staying in the state and remaining in the workforce after graduation.

With the help of NPR data journalist Matt Stiles, StateImpact has built an interactive map showing the number of students from each county graduating from a public college or university in 2009 and what percentage of those students remained in the state one year later.

Why are people pulling up stakes and taking their degrees elsewhere? And on the other hand, why do others stay?

One Who Left: Kim Maxwell Vu

Kim Maxwell Vu left Indiana immediately after graduating from Butler University with a degree in journalism.

Kim Maxwell Vu graduated from Columbus North High School in Columbus, Ind. in 2001. Attended Ball State University’s School of Journalism studying visual journalism graduating with a Bachelor of Arts. Left Indiana after graduation to work in Minnesota for the Minneapolis Star Tribune. Left Minneapolis for Virginia to work for USA Today. Left Virginia for Washington D.C. to work for the Washington Post.

“I have two homes. My family is in Indiana, but my job is in Washington.”

Kim Maxwell Vu is very, very clear on why he left Indiana. He felt that there were no jobs in his field available in the state.

“I could have gone and worked for a small town little newspaper, but there is a limit to what you can do in something like visual journalism,” Vu says. “Even at a pretty well-designed paper like the Indianapolis Star.”

According to the Indiana Department of Workforce Development, there are more than 800 working reporters in Indiana. This means that reporting jobs account for less than one percent of the 2.7 million total jobs in the state.

One Who Stayed: Matthew Spiller 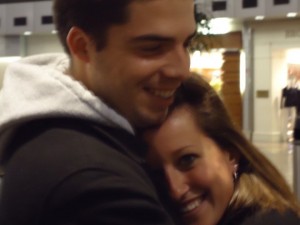 Matthew Spiller defies the trend. While many of his peers are looking at career paths that will take them away from Indiana, he has chosen to stay.

Matt Spiller graduated from Brown County High School in 2005. Attended Franklin College in Franklin, Ind., graduating in 2009 with a degree in biology. Moved to Indianapolis, Ind. to work for AIT Laboratories as an analytical chemist conducting forensic screenings. He currently attends Purdue University’s College of Pharmacy.

“I’d like see the rest of my life involved with Indiana.”

Matthew Spiller never really considered leaving Indiana. When he received a scholarship from Eli Lilly, he had no qualms with a stipulation that he attend a college or university in his home state.  After he graduated from Franklin College, he immediately looked for work in Indianapolis. After a year of working as a professional chemist, he decided to go back to school to study pharmacy.

“If you prove yourself, if you are an adequate professional and you want to specialize there are many clinical positions throughout the US,” Spiller says. “And in general, those jobs are where you want to live.”

There are roughly 7,000 pharmacist in Indiana — almost 10 times the number of professional journalist working in Indiana. Also working in Spiller’s favor is the fact that he shares his program with about 150 other students seeking masters degrees and only a small handful of those graduate at any given time.

And Spiller says he isn’t tied to working on the retail end of pharmacy. He’s also considering work in pharmaceutical manufacturing.

The Light At The End Of The Tunnel

Indiana’s retention rate has actually improved slightly in some areas between the initial time frame studied in the original report and the data provided for this study. Overall, 55 percent of students graduating with a bachelors in 2000 remained in the state one year after exiting college. That number has since improved to 61 percent for students graduating in 2009.

However, rates for Indiana remain below the level of nearby states like Ohio, where 78 percent of all students graduating in 2010 appeared in the Ohio workforce one year later.

An earlier version of this story referred to Franklin College as Franklin University.

An earlier version of this story reported that Matt Spiller was seeking a professional degree. He is  pursuing a masters degree.