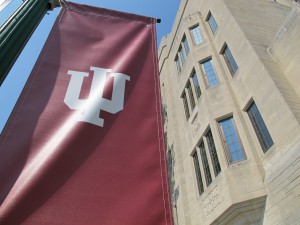 For Indiana students, getting a college degree requires taking on the kind of debt that could pay for a new car.

That’s according to a new dataset which claims to offer a different way to measure exactly how much debt students are taking on. But critics say the ratios it produces are misleading.

Policy analysts at Education Sector, a non-partisan education think tank, came up with a “debt to credential ratio” to draw a connection between two problems at U.S. colleges: low graduation rates and high debt burdens.

“That red flag could indicate that they have a really low graduation rate, that students are taking on lots of debt for the degrees they are earning. Most likely, it indicates both,” Dillon said.

So are there red flags waving for Indiana colleges? Take a look at the chart: 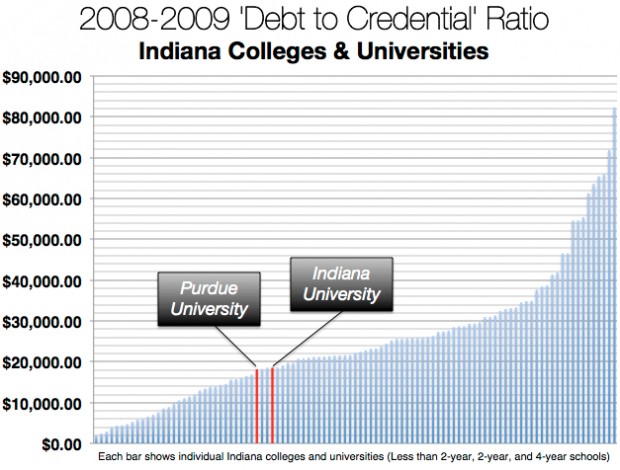 Some takeaways from the Indiana data:

Some have criticized Education Sector’s study for failing to track individual students. The dataset compares total undergraduate debt at an institution to the number of degrees issued in one year, providing what Dillon calls a “snapshot of an institution.” But Inside Higher Education reports one analyst says the resulting ratio can be confusing:

Outside experts said the study’s premise and conclusions were interesting but flawed in some ways, in part because it doesn’t give a clear picture of individual students’ debt burdens. “Are you trying to encourage fewer students borrowing, or are you trying to encourage less borrowing by the students who do borrow?” said Art Hauptman, an independent policy analyst. Comparing a dollar figure with the number of graduates can confuse the issue, Hauptman said.

Dillon says the ratio isn’t a good indicator of a specific problem at a university, but urges critics not the miss the forest for the trees. The data, she says, indicate a sharp overall increase in student debt in recent years. As she told StateImpact:

I think it’s an important conversation that we need to have. Colleges continue to increase tuition prices and students are asked to take on more and more debt for a college degree with the promise that it will be worth it financially, but we haven’t had a conversation about exactly that question, which is, ‘How much debt should we ask students to be taking? And is it at that point where it becomes unreasonable to ask students to take on that much?’