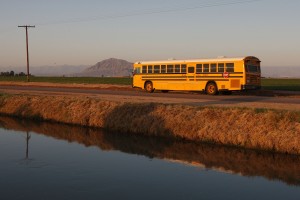 Parents in Franklin Township have accused the district of double taxing for use of bus services.

Indiana Attorney General Greg Zoeller issued a legal opinion today finding it’s illegal for Indianapolis’ Franklin Township Schools to charge for bussing.  The finding does not have the authority of law, but could be influential in a lawsuit brought against the corporation.  A group of parents is suing the district on the grounds that bussing fees are unconstitutional.  At the root of the claim is a question of accessibility.  Do bussing fees inhibit access to public education?

Attorney General Greg Zoeller and lawyers with his office says the answer is a definitive yes.

We’ve reported several times on the issue of busing fees at Franklin Township.  Early on, the move caused major backup as parents attempted to drive their children to school rather than pay the bussing fees.

As StateImpact reported, the district has argued that the move was a necessity brought on by shrinking budgets.

“There’s no way to candy coat it,” [Franklin Township Superintendent Walter] Bourke said of the busing fees and traffic tie-ups as he spoke with StateImpact Wednesday afternoon. “I’m not pleased that I’m the CEO of a school corporation that’s in a financial situation where we can’t serve families the way we should.”

We’ve also reported on many parents’ reaction to this claim.

The Attorney General’s opinion is that parents can privately contract with vendors to provide transportation services, but that schools do not unilaterally have this authority.  Zoeller argues schools cannot impose bussing fees onto parents without their consent, either to pay for transportation services provided by the district or by a 3rd party vendor hired by the district.

According to the announcement, the Attorney General does not usually comment on ongoing litigation.  However, the study was already in progress before the lawsuit was filed and several requests for an opinion have been submitted by lawmakers looking to draft new legislation.