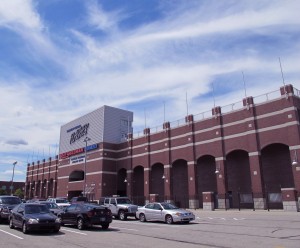 The district acknowledges the Franklin Township Central High School's football stadium, built at a one-time cost of $4.3 million, has created a perception that the district built "too fast and too lavishly."

For several Franklin Township district parents and students who spoke to StateImpact, something doesn’t add up in their district:

This school year, families have to pay for their kids to ride the bus, or drop kids off at schools themselves while driving past several things they think the district might not need to have paid for — like Franklin Township’s $4.3 million football stadium, and a high school whose hallways are lined with flat screen televisions.

District officials acknowledge that remnants of boom times in the district have left a lingering perception that the district built “too fast and too lavishly,” and could be one reason a district-wide levy issue failed last May.

But Franklin Township superintendent Walter Bourke says these perceptions are leftover from a previous district administration. The way he sees it, the loss of revenue from caps on property taxes voters approved last November has amplified the district’s financial growing pains.

The township’s population has increased by 71 percent since 1990 — Franklin Township was, at one point, the fourth-fastest growing district in the state — forcing the school district to go into deep debt to build schools to handle a booming student population. To pay for its new buildings, Bourke says the district will have to make annual payments of $24 million until 2022.

But the property tax caps have dried up the source of revenue that fueled the building boom in the first place, leaving $17 million in a rainy day fund that Bourke says have to last until the district either pays off its debts or finds a new source of money.

Bourke acknowledges the district could pay for transportation for the next three to five years with the rainy day funds, but then the money would be gone. Bourke says the district needs that money to cover costs of building maintenance and security while it pays off its debts. As Bourke puts it, “Do we spend our savings and then balance our budget? Or do we simply balance our budget?”