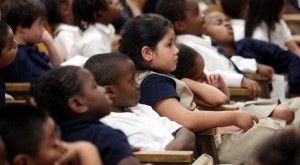 About 4,000 students are currently participating in the voucher program.

We put up two interviews with opposing viewpoints on the issue of school vouchers. The first came from Indiana State Teachers Association President Nate Schnellenberger.

The second interview was with Indiana Superintendent of Public Instruction Tony Bennett.

Across the nation people are impressed with the implementation and the interest in the voucher program in Indiana.  We have successfully given almost 4,000 students of low or very moderate means the ability to make choices they’ve never made before.

Several readers had something to say about Schnellenberger’s contention that vouchers might be unconstitutional.  “RCE” posited that the constitution should be read to include many models rather than a single public school option.

It is instructive that Indiana’s Education Article has two clauses connected by the word “and,” not “or” or “therefore” or any other conjuntion but “and.” A common sense reading of the Article suggest that the first clause is clearly intended to provide the Indiana legislature with broad authority to support a wide range of educational approaches, provided these include a general and uniform system of Common Schools.

It should be noted that Shnellenberger’s concern does not center around the portion of the Indiana State Constitution that focuses on the definition of Common Schools.  The ISTA is claiming that the voucher program violates Article 1 Section 6, which forbids the use of tax dollars to support religious institutions.

Reader “Previous Post Below” took a different tack.  He points out that parents who send their children to a private school at their own expense still pay taxes to support public schools.

Why should a parent who sends their child to a religious school be required to pay the full amount of school taxes to support children in public school. By the interviewees own logic that parent should not have to support public schools then. Simply the voucher program provides money for that child (a significant amount less) that would be spent on them in public school.