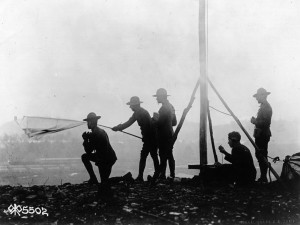 A semaphore unit for signalling being used by the US Army. (Photo by Hulton Archive/Getty Images)

Military affairs usually fall outside the purview of this publication, but in honor of Veteran’s Day, we thought we might remind our former service people of an educational opportunity offered by the state of Indiana.  All those who served in World War I and II, the Korean War and the Vietnam War may qualify to receive their high school diploma.  The veteran must have…

1. Attended a public or nonpublic high school in Indiana prior to military service.

2. Been a student in good standing.

3. Not graduated or received a diploma because of leaving high school for military service.

4. Been honorably discharged from the armed forces of the United States of America.

The application can be found here.

Diplomas can also be issued posthumously to the families of veterans who have passed away.