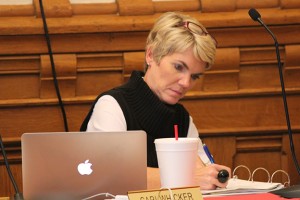 State Board of Education member Cari Whicker at Wednesday’s special meeting. The board had its last discussion around new diplomas to be implemented in the 2018-2019 school year. (Photo Credit: Rachel Morello/StateImpact Indiana)

The State Board of Education met Wednesday for a special meeting to discuss the proposed changes to Indiana’s high school diploma requirements.

The board did not take action during the meeting. Members must take a vote regarding the proposed changes by Dec. 1.

Representatives from the state’s Commission for Higher Education presented the new diplomas and reasoning behind the changes before the board heard public testimony. The proposed changes reduce the number of diplomas a student may receive from four to three and increases the overall number of credits it takes to graduate.

Below is a table the ICHE presented to the board that shows the current diplomas and how many credits a student must complete to earn it, compared to the proposed new diplomas:

Another notable change is the requirement of more math credits. All diplomas require students to take eight credits of math, essentially making students take a math class every year of school. A new requirement included in “College and Career Ready” electives is a financial literacy class, which the ICHE said has been met with strong public support.

One of the more controversial changes that much of the public comment focused on had to do with the lack of fine arts requirements in the diplomas. The current Core 40 and Honors Core 40 diplomas require world languages and fine arts classes in some capacity, whereas the new diplomas suggest these classes only for students who want to go on to a four-year college.

Many of those who testified say fine arts should be required, not suggested. But board member Cari Whicker says approving these diplomas is a balance between what is necessary to require and school capacity to fulfill those requirements. Teresa Lubbers,  Indiana’s Commissioner for Higher Education, agrees.

“We could have a diploma of 58 credits and a diploma with everything we think would be helpful and we’d have capacity issues to deal with,” Lubbers says.

Special education is another area where there is concern, and many parents of special education students testified that fewer diploma options will make it harder for their children to graduate.

The reasoning behind this sentiment comes from the requirements of the current General Diploma that would go away if these new diplomas are passed. The Workforce Ready diploma – which in theory replaces the the General Diploma – requires more credits, which some say could be a barrier to special education students receiving a diploma.

But state Superintendent Glenda Ritz says this was considered when crafting the new diplomas, and that the requirements won’t hurt these students.

There is currently a “certificate of completion” a special education student can receive, but it is not considered a diploma.

Ritz says the board plans to vote to pass the diplomas at its regularly schedule meeting Nov. 4.