Whether a student took the online or paper/pencil version of the 2015 ISTEP+ test, he or she will need to achieve the same score to “pass” the annual exam.

But students who took the online assessment could get a little extra boost that would help them reach that mark.

Indiana’s State Board of Education approved a recommended cut score for the statewide test during a special meeting Wednesday. The board had planned to vote on this pass/fail point during its meeting earlier this month, but decided instead to wait until test vendor CTB finished its comparison of the online and paper/pencil versions of the 2015 test. 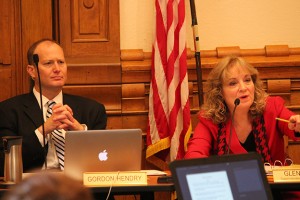 Those experts say the data reviewed confirms that small, but significant differences in difficulty did in fact exist between the two versions.

Derek Briggs served as lead author of the study comparing Indiana’s two test types. In his final recommendations, he wrote that in most cases, the average effect of the differences worked in favor of students taking the paper/pencil test.

Briggs suggested test graders make up that difference by assigning a few bonus points for students who took the online assessment.

Briggs also proposed the board examine the potential consequences of altering those scores on school accountability decisions. He says there’s a case to be made for adjusting A-F grades based on which test format, or “mode,”  students took.

“If any schools shift upwards [with additional online points], it would seem wise to give them the benefit of the doubt,” Briggs wrote. 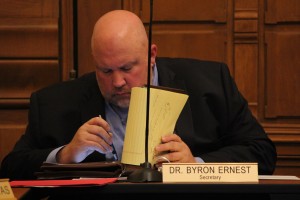 He added that adjusting a school’s grade when it would be disadvantaged by taking the online version creates an incentive for more schools to move to the online format in the future.

The board voted to approve the recommended cut scores, but decided they’ll discuss Briggs’ other recommendations at their regular monthly meeting next week, on Nov. 4.

In other words, today’s vote allowed the board to establish the test’s pass/fail border line. Next week’s discussion will focus on this year’s scores, and how they relate to that line.

“That requires a little bit of study,” says state Superintendent Glenda Ritz. “We just got the report yesterday, so we want to give ourselves time to be able to see what the impact of that is.”

Ritz says the state also needs to contact the U.S. Department of Education, to see whether taking the kind of action Briggs recommended regarding accountability is within the realm of possibility under Indiana’s No Child Left Behind waiver.

Wednesday’s vote means test officials will need to wait before beginning work to finalize student scores. This further prolongs the process of releasing ISTEP+ scores to schools – which has already been delayed due to grading issues on CTB’s part.

Ritz says the board will have a better idea of what the timeline looks like for finalizing and releasing student scores after next week’s meeting.

Test score information typically plays into school A-F accountability grades (assigned by the state), teacher evaluations and teacher pay (determined by individual school districts). Whether that tradition continues this year remains to be seen – both state Superintendent Glenda Ritz and – as of Tuesday – Gov. Mike Pence have said they do not want the predicted dip in ISTEP+ scores to negatively affect students or teachers.

Ritz has requested for months that state policymakers back her proposal to pause accountability measures tied to 2015 test results. Pence has always waved off the idea, but in a letter to Ritz and her fellow State Board members Tuesday, appeared to change his tune by requesting the group “suggest solutions that preserve accountability and transparency for Indiana’s academic system.”

In that letter, Pence also wrote that he is working with legislators to draft legislation to allow these protections, although StateImpact has yet to receive confirmation from any lawmakers that this is indeed in the works.