We at StateImpact have many recurring education stories that will presumably continue for some time to come: standardized testing, teacher evaluations, school accountability…the list goes on. 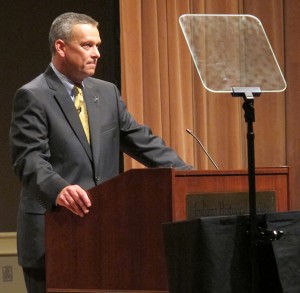 One storyline we never expected to continue for as long as it has: the recurring presence of former state superintendent Tony Bennett.

As we reported last summer, an ethics case against the former state official resulted in a $5,000 fine. The State Ethics Commission approved the settlement regarding allegations that Bennett used state resources during his 2012 re-election campaign, as discovered in a series of emails obtained by the Associated Press in 2013.

The exchanges also revealed that Bennett and his staff may have altered Indiana’s A-F school grading formula to benefit Christel House Academy, an Indianapolis charter school founded by one of Bennett’s supporters. Inspector General David Thomas cleared Bennett of charges for that accusation.

Marion County Prosecutor Terry Curry said Friday that the state will not file criminal charges in connection with either portion of the ethics case.

“No evidence was presented to justify criminal charges, and prosecution on each of these issues is declined,” Curry said in a statement. “I would note that submission of the same Inspector General materials to the U.S. Attorney’s Office likewise did not result in any Federal criminal charges.”

The Indianapolis Star reports Bennett declined to comment directly on the case, instead deferring to his attorney, Larry Mackey:

In a written statement, Mackey said Bennett “appreciates the thorough and professional review conducted by the MCPO and the conclusion reached.”

“This matter is now closed and fully behind him for which he is very grateful,” Mackey wrote. “As for Tony Bennett, whether in the public or private sector, he will continue working to improve the future of young people everywhere.”

Voters elected Bennett as Indiana’s schools chief in 2008. He served until his defeat by current superintendent Glenda Ritz in 2012. Soon after, the Florida Board of Education unanimously selected him as that state’s new education commissioner, a post he resigned in August 2013, following the AP’s published reports.

But, it seems we may not have heard the last of the educator in the Hoosier state.

Bennett is listed among the advisors for a proposed Indianapolis charter school. The application for ACE Preparatory Academy, filed with the state’s Charter School Board last month, also includes a Letter of Support from current State Board of Education member Dan Elsener.

The state charter school board held a hearing April 29 to gauge public input on whether or not to grant a charter for the proposed school. The group has not yet said when it will make its final decision.