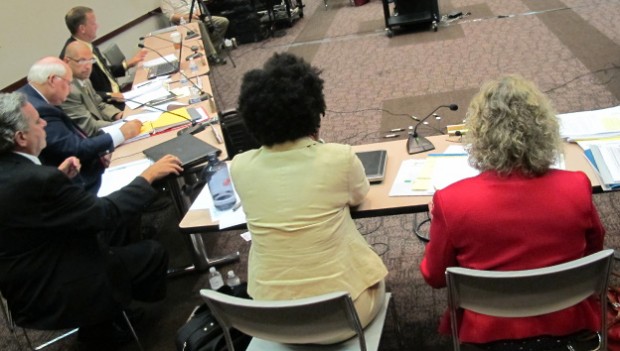 Should state officials throw those grades out? Keep them? Raise them? And what about next year’s grades?

Ritz “will be presenting options… but not making specific recommendations” to the State Board of Education at its monthly meeting this week, a Department of Education spokesperson tells StateImpact.

But the analysts called the last-minute changes Bennett’s staff made to the A-F formula “plausible,” adding the changes were “consistently applied” to schools across the state — not just Christel House Academy, a well-regarded Indianapolis charter school whose namesake is also a prominent GOP donor.

The trouble with Bennett’s A-F model, Ritz contends, is that it doesn’t account for schools with combinations of grade levels that are different from the traditionally-configured elementary, middle or high schools.

For instance, Hammond Academy — a charter school in northwest Indiana — enrolls students in grades 6 through 11, meaning its students take the same tests as middle schoolers (the ISTEP+) and high schoolers (the End-of-Course assessments). But the school also lacks one data point used to configure a high school’s grade: a graduation rate.

Christel House Academy (a K-11 school) lacked a graduation rate too. State officials figured in 2012 the fact the school was missing a key data point was unfairly hurting its score, so they disregarded Christel House’s “awful” high school scores in calculating its A-F grade.

In Hammond Academy’s case, though, this change brought their grade down from what would have been a D to an F. (School Matters‘ Steve Hinnefeld identified this fact a few weeks ago, by the way.)

So What Options Does The State Board Have?

This is where things get complicated. Suffice it to say, the State Board is at least scheduled to sort it all out on Wednesday. The discussion could be lengthy and complicated.

If you’re happy with that answer, you can click away from this post now. If you want to come into the weeds with us, continue reading.

With the A-F recommendations listed as an “Action Item” on Wednesday’s agenda, the State Board is likely to take a vote directing state officials what to do about not only the 2012 school grades, but about calculating the forthcoming 2013 school grades.

And what about next year’s grades?

Ritz is currently co-chairing a panel of educators that’s re-writing the state’s A-F grading system as it will apply to schools’ grades in 2014-15.

But this year, state officials will use the Bennett-era model once again. That leaves the State Board with several decisions to make — particularly as it pertains to those schools with unusual grade configurations.

Should these unusual schools receive no grades this year? Get grades in the same way as they did last year? Modify the grading model to account for these different school types? Or should the State Board treat each of these schools on a case-by-case basis?

All of these options are on the table at Wednesday’s meeting.