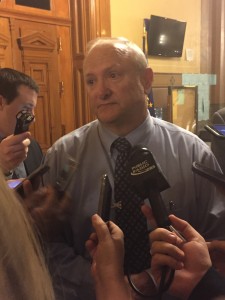 It was a legislative session dominated by education issues, and it’s finally over.

Since it was a budget session, legislators focused on funding. With more than 50 percent of the budget typically allocated to education, how the state funds schools remained at the center of most budget talks.

Now that the session is over and the dust has settled a little, let’s review which measures passed and what it will mean for Indiana’s students.

The budget, a brief 269-page document, contains important changes to how much money public schools will receive from the state. While legislative leaders tout this as the most money ever allocated to education (a $464 million increase), how schools get that money dramatically changed.

While the base amount given to each child went up, a separate pot of money for schools that serve low income students and students with special needs (called complexity) won’t be distributed as widely as before.

(Check your school district’s projected budget here. An important thing to remember: these dollar amounts are based on projected enrollment in these districts, so if you’re confused why a certain district is getting more or less than another, it’s probably based on that.)

In the past, a district serving lots of these students, like Indianapolis Public Schools, got more money than schools that didn’t. But at the beginning of this session, House Republicans said they wanted to close that gap and make school funding more equal.

The Senate pushed back on that idea, and the final budget seemed to meet in the middle. Poorer districts are still seeing a cut, but not as drastic as the one presented under the House’s original budget, something that pleases IPS superintendent Louis Ferebee.

“If we’re able to maintain stable enrollment in the district, based on what we’ve seen, we believe that preliminarily that will be about a $6 million reduction,” Ferebee said at a school board meeting earlier this week. “Ideally we don’t want to reduce any funding but pleased to see that the advocacy of our community members and all that have gone to the Statehouse to speak, we have gotten indication that that was very productive.”

Wealthier districts say they are still hurt by the update to this formula, because the property tax caps that went into place in 2008 took away a huge revenue stream that the funding formula doesn’t come close to replacing. This is why we’re seeing more and more school referenda on the ballots this May.

$3.7 billion is allocated to higher education under the budget, with increases for state universities.

“I’m still going to look to my friend Mitch Daniels (Purdue President) to lead the charge on no tuition increases and hope i can convince everyone else to,” Kenley says.

In a statement released by Indiana University spokesperson Mark Land, IU expresses gratitude for these increases but does not say whether or not they will raise tuition rates:

“The support by the General Assembly is invaluable to allowing IU to continue to meet its commitment to providing an affordable, world-class education that prepares students for the complex world they will enter after leaving college, and to fulfilling our mission to serve the state of Indiana.”

State Board of Education Makeup And Duties

One of the most controversial pieces of legislation this session was Senate Bill 1, a measure changing the duties and makeup of the State Board of Education. Legislators in both the House and Senate introduced a number of bills at the beginning of the session addressing changes in both chairmanship and membership of the board.

The move came after more than a year of fighting and disfunction between board members, state superintendent Glenda Ritz and the Department of Education.

Starting in 2017, the board will elect its own chair, rather than having the elected state superintendent automatically assume that position. Starting July 1, the board will elect a vice-chairman who will work with the chair to establish the agenda, something Rep. Jud McMillin, R-Brookville, one of the bill’s sponsors, says will force the group to work together.

“That’s the whole point, is to get these people talking and communicating better,” McMillin says. “What this is simply asking is for two people who serve on the same board – who purportedly have the same goal in mind – to be able to talk well enough to figure out what items should be on the agenda for the next meeting. If they can’t agree on that, then we better come back here and do more.”

Board membership will remain at 11 – including the superintendent – but rather than giving all 10 appointments to the governor, he will appoint 8 members and the Speaker of the House and Senate President Pro Tem will each name one.

Both House Speaker Brian Bosma, R-Indianapolis, and Senate President Pro Tem David Long, R-Fort Wayne, say they already have people in mind for their appointments, and they will likely not be people currently serving on the board.

These changes go into effect June 1, and if the governor decides to choose new members rather than reappoint current ones, we could see an entirely different board in just a few months.

SB1 also addresses certain duties that caused much of the drama between the SBOE and the IDOE. Under the law, the board is now considered an education authority, meaning it has access to certain student data for the purpose of determining policy.

One new law changes how schools considered failing under the state’s accountability system can work with the state to improve. After six years of earning an F, school districts can create their own plan to improve student performance by using existing resources in the district or community. Currently, when the state board intervenes with a failing school, a third party entity is hired to come in and help turn the school around. Many districts didn’t like working with these groups, and after the Evansville school district made dramatic improvements in its failing schools using the turnaround method, legislators approved the idea for statewide use.

Teachers are now eligible for a $100 tax credit to help offset the cost of school supplies bought with personal money. The budget also allocates more money for teacher performance grants, around $70 million over the two years.