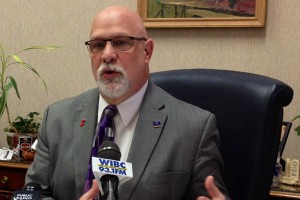 Where does all the money that taxpayers invest in public education go?

That’s a question lawmakers must consider every two years when they build the state’s biennial budget. And during this “education session,” it’s more relevant than ever – the proposed budget released by House Republicans Monday spends more money on K-12 education than ever before in state history.

In fact, K-12 and higher education spending combined account for 64 percent of total general fund appropriations over the next two years.

Rep. Tim Brown, R-Crawfordsville, who constructed the proposal, says this is a new track record.

“The budget centers on education,” Brown explains. “I’m very proud of what we can do with [that] focus.”

The budget is big and complicated (but then again, what’s not this session?) Let’s take a closer look at some of the numbers and what they mean for schools. 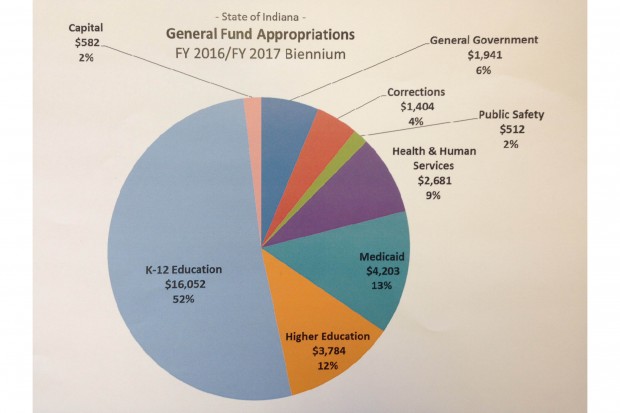 Foundation: The Money Follows the Student

The biggest change in this budget involves a shift in the school funding formula – the equation that determines how much money the state gives each school corporation.

State funding is based on attendance. Schools submit an student head count (called “ADM,” or average daily membership) to the state twice a year. They then receive a basic grant amount (called “foundation“) per student in that count – that number currently sits at $4,583 per student. The House GOP budget calls to increase it each of the next two years: 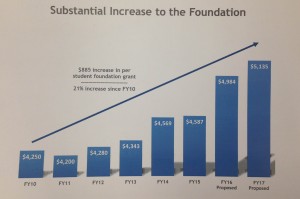 Why increase that amount?

The state is in the middle of a seven-year process to equalize foundation funding for all students (aptly named “transition to foundation“). The goal is to narrow the gap between districts rich and poor. The foundation increases included in this budget would help the state chop a year off of that process.

It’s also important to know that kindergarten students will now count as a full student in the ADM – they used to count as one-half. So districts with more of those kids will receive more foundation funding.

Complexity: Changing The Definition of “At-Risk”

School corporations also receive state aid based on the number of “at-risk” students in their district – a calculation called the “complexity index.” 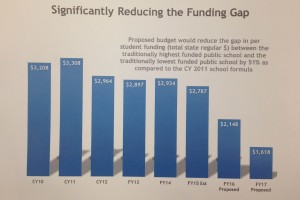 Free lunch is a federal program. In order to receive it, students have to sign up through the Family and Social Services Administration and provide family income verification. On the flip-side, sign-up for reduced lunch programs varies from school to school.

“The reduced lunch is a highly variable and complex parameter. Could it be that one corporation was very aggressive in the reduced part of lunch and another corporation isn’t?” Brown explains. “Free lunch is verifiable and should be a much more readily available number.”

Additional funds are distributed based on the number of students who graduate with honors and students who have disabilities. The dollar amounts for those grants will both increase, as well.

What does all this mean, exactly?
This budget would hit urban districts harder than suburban and rural schools. That’s because a lot of urban schools are seeing a decline in enrollment right now (aka a smaller ADM). Remember, the money follows the student – so fewer students means less foundation funding.
Additionally, as the state attempts to level out foundation funding, schools that used to receive the most of those dollars (those moving down along the “transition”) will now receive less.
Check out this case study presented by Chalkbeat Indiana:

Indianapolis Public Schools, for example, would see a 6 percent reduction in total state tuition aid by 2017 despite being one of the state’s poorest districts, with more than 75 percent of children coming from families that are poor enough to qualify for free or reduced-price lunch. Some of the state’s other poorest cities also would face basic tuition aid cuts: 19 percent for Gary, 10.5 percent for East Chicago and 3 percent for Hammond by 2017.

Meanwhile, the two wealthiest school districts in the state for family income — Zionsville and Carmel — would see large increases in total state basic tuition aid: 10.6 percent and 10.7 percent, respectively, over the two-year budget period. Neither district has more than 10 percent of its students qualifying for free or reduced-price lunch.

“Somebody asked me earlier, would I make everybody happy? And I don’t know if I have those powers,” Brown explains. “Different school corporations are affected differently. We want corporations that have kids looking similar to be treated the same, so that we lift all boats and make the foundation much bigger and stronger for all students – the at-risk kids as well as kids that aren’t defined as at-risk.”

“I feel good that we’re able to give such large increases, that we made that a priority, and that we’ll be able to have a building block for the future,” Brown says.

The House GOP also supports many of Governor Mike Pence’s proposals in their budget:

“I’m very pleased with the House budget that’s been produced,” Pence says. “It includes all of the key elements of our reforms. I’m confident that in this education session we’re going to make great progress in our schools.”

The budget also creates a new grant for charter schools separate from the funding formula. Schools would be able to submit an application to the state for up to $1,500 per student to help pay for building, technology and transportation needs.

Brown says he expects the House Ways and Means Committee to vote on the proposed budget this week.