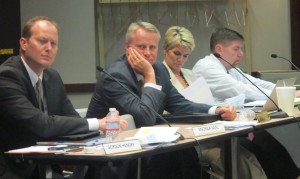 State Board of Education members Gordon Hendry, Dan Elsener, Cari Whicker and Brad Oliver listen to a presentation during the October meeting.

The State Board of Education meeting Wednesday will follow a full agenda focusing on assessments, timelines for various tests and updates on major education initiatives, including the new pre-k pilot program.

The board is also considering two resolutions that seek to involve the board more in important decisions, rather than leaving those to state superintendent Glenda Ritz and the Indiana Department of Education.

As we reported yesterday, one resolutions would amend the board’s meeting procedures. The suggested changes would allow the entire board to have a say regarding when a meeting is planned, it would update the appeals procedures and alter how the board is required to solve disputes among its members (something we’ve been seeing a lot of the past year).

Another resolution focuses specifically on the board’s involvement in keeping the state’s No Child Left Behind waiver.

The state submitted their proposal to the U.S. Department of Education on June 30, but board members claim they did not receive all pertinent materials for review before the proposal was submitted. This sparked a debate between board member Brad Oliver and Ritz at a June 23 meeting.

The new resolution seeks to involve the board if amendments to the proposal are submitted and requires monthly updates if the waiver is extended.

In a statement released Tuesday afternoon, Ritz said the resolution regarding the NCLB waiver is unreasonable.

“This resolution unfairly questions the honesty and capacity of my administration to implement the waiver and may result in ramifications from Washington,” Ritz said. “I am fully committed to implementing our waiver. Both the Governor and our legislative leaders have said that they fully support our waiver extension. Based in part on this support, the Department of Education spent countless hours preparing and submitting our waiver application. The Board has made it clear that they will not listen to me or the Department.  I have asked that the Governor remove this resolution from consideration tomorrow before our schools and students suffer the consequences.”