Indiana legislators finalized a contentious bill Wednesday night calling for several changes to the composition of the State Board of Education.

Over the course of this year’s “education session,” legislators tossed around a number of ideas to help ease strain on the board. 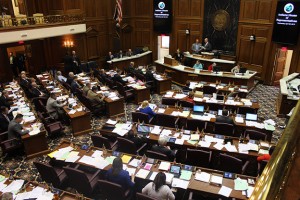 Members of the Indiana House of Representatives met Wednesday to finalize legislation on a number of different issues, as did their Senate colleagues. (Photo Credit: Rachel Morello/StateImpact Indiana)

The final version of Senate Bill 1 will allow state Superintendent Glenda Ritz to keep her position as chair of the board – at least until the end of her current term, in January 2017. After that, the board will elect a chair annually from among its ranks.

Board membership will remain at its current number of 11 members, including the superintendent. But, as has been tradition, board members will no longer be solely appointed by the governor. He’ll retain eight appointments, with the House Speaker and Senate President Pro Tem each adding one of their own.

The measure also provides for the board to elect a vice chair as early as July 1 of this year. Some lawmakers argued adding another leadership position could cause even more conflict.

Rep. Jud McMillin, one of the bill’s House conferees, says no matter who occupies those roles, they will have to work their issues out.

“That’s the whole point, is to get these people talking and communicating better,” McMillin says. “What this is simply asking is for two people who serve on the same board – who purportedly have the same goal in mind – to be able to talk well enough to figure out what items should be on the agenda for the next meeting. If they can’t agree on that, then we better come back here and do more.”

Other changes attempt to clear up fog between the board and the state Department of Education, a relationship that has caused much of the board’s tension. Legislators hope data sharing will become easier when they designate the board as a “state education authority” – a title that allows the group access to information that they’ve complained the IDOE doesn’t share.

The board will also gain authority to help shape the statewide standardized ISTEP+ test – a power previously reserved for the IDOE.

But the modifications didn’t stop there.

Leaders also tweaked the state budget – which has been a hot-button education issue all on its own, what with changes to the school funding formula – to include a few shifts between the board and IDOE.

Following in the footsteps of SB1, final budget language authorizes the state board to help develop and implement the ISTEP+ test. They will be able to help establish criteria for the test’s content and format, as well as any future requests for proposals to craft any new tests. They will also have power to establish passing scores, otherwise known as “cut scores.”

State Board of Education spokesperson Marc Lotter says its important to note this addition serves to clarify roles, not reassign them. The board will handle rulemaking for the ISTEP+, whereas the duty of implementing the program still falls to the IDOE.

The budget also eliminates the education roundtable, splitting many of that body’s former responsibilities between the IDOE and the state Commission for Higher Education.

Legislators had considered another small change in language that would have transferred oversight of the state’s private school voucher program from the IDOE to the state board. The Senate decided midday to quash the idea.

Despite its short life, many had begun to classify it an attempt by Republicans to strip Superintendent Ritz (a Democrat) of some of the her authority. Gov. Mike Pence told members of the media that was not the case.

“I think that the goal here is that we would bring about a range of reforms in the State Board of Education that would make it more possible for those various initiatives to operate with more efficiency and more effectiveness for our kids,” Pence says.

Legislators say they hope all fixes to the board will make the path for other school-related measures smoother and more efficient.