For the first time since Governor Pence signed an executive order dissolving the Center for Education and Career Innovation, state superintendent Glenda Ritz, CECI employees and the State Board of Education will meet together for January’s regularly scheduled SBOE meeting. 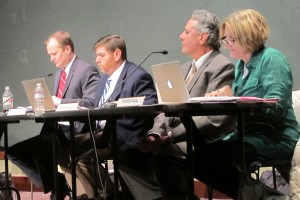 With this being only one of two meetings left before the agency is permanently dissolved Feb. 20, Wednesday’s meeting will begin to shed light on the future of SBOE meetings without CECI.

As we’ve reported, Ritz and CECI have been at odds since its creation in 2013, with Ritz saying the governor created the agency to undermine her and the IDOE. Pence says he hopes this action will stop the fighting, but it’s going to be more complicated than that.

Looking at Wednesday’s agenda, the new business isn’t particularly controversial, including summer school funding, quality review processes and some recognitions. But with CECI employees departing, one spokesperson says the board will look to complete the A-F school grade rewrite (headed up by Claire Fiddian-Green) before Feb. 20.

The other big project facing a tight deadline: assessments. There will be an update on the progress of the new version of the ISTEP+, which currently is still looking for a vendor.