When Governor Mike Pence unveiled his legislative agenda last month, he presented plenty of new ideas for Indiana schools – but a few bombshell announcements overshadowed some of the others. 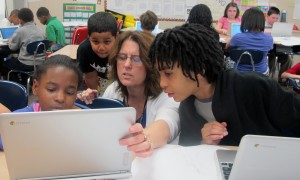 Some of Pence’s initiatives that received less attention involve familiar-sounding concepts such as modifying the K-12 school funding formula, setting up transformation zones to turn around failing schools and investing more money in career and technical education at the high school level.

One brand-new idea Pence introduced was something he called “Freedom To Teach.”

The program would essentially be a teacher innovation fund, giving the State Board of Education authority to grant schools waivers from some requirements in state regulations that guide teacher compensation. To qualify, school districts would be required to submit proposals showing how they plan to “innovate and refocus resources on the classroom.”

In an editorial, Pence wrote the program would help attract and retain the best teaching talent, an important step in improving educational performance in Indiana schools.

When the team at Chalkbeat Indiana spoke to a few legislative leaders to get their take on the plan, they didn’t sound too optimistic:

[Senate Democratic leader Tim Lanane, D-Anderson] took issue with Pence’s “freedom to teach” program, saying the state should trust teachers and give them freedom from tests instead. He thinks the real goal might be to allow districts a way around union contract rules.

“I hope this isn’t just another fancy way of saying we want to limit the rights of teachers to collectively bargain,” Lanane said.

House Democratic leader Rep. Scott Pelath of Michigan City said Pence’s proposal has a nice name, but it would have ill effects on teachers.

“‘Freedom to teach’ — those are just words,” Pelath said. “Those are words that were dreamed up in some think tank with pollsters sitting by their sides. That’s not about freedom to teach, it’s about deconstructing and deregulating schools to the point where they don’t matter anymore, and that’s what the goal is.”

The legislature will begin discussing this and other recommendations for education-related initiatives when the session begins January 6.