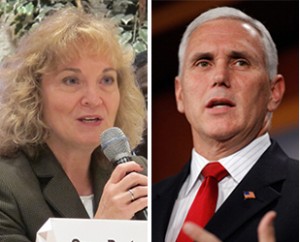 Governor Mike Pence is signing an executive order to dissolve his education agency, a group that has been a point of contention between himself and state superintendent Glenda Ritz.

The governor created the agency in August 2013, and it has been a point of controversy between himself and state superintendent Glenda Ritz ever since. Ritz says the agency is a threat to her own Department of Education.

Pence says his decision is the first step to get the State Board of Education working again.

“We’ve all seen the headlines, we’ve seen the confusion and even the friction at the highest levels of state government, we’ve all been frustrated” Pence says. “To maintain our momentum and implement new policies, we’ll also need to fix what’s broken in education in Indiana.”

Pence expressed pride in the work the CECI has done in the last two years, but says he is aware of the controversy that has surrounded this center since its creation.

The governor adds that he believes CECI has laid the groundwork necessary to accomplish statewide goals through other existing agencies and programs.

In connection with this first step, the Governor also announced a second controversial move: his intent to advise the Indiana General Assembly to pass legislation allowing the State Board to elect its own chair. This means the superintendent will no longer automatically assume that position, as has been the tradition.

Pence says while he believes the Superintendent of Public Instruction should always be on the state board, to get the board functioning effectively he finds it crucial the board have the ability to elect a chair who can focus on building consensus and implementing and overseeing state policies.

“It’s time to take politics out of education in Indiana, or at least out of the State Board of Education and allow that body to get back to the business of focusing on implementing the policies that the people of Indiana have embraced and enacted, and seeing them faithfully through to their completion,” Pence says.

The governor points out that many of the board members he appoints, including the Commission for Higher Education, elect their own chairs.

House minority leader Scott Pelath says this move by Pence is a way to strip Ritz of her power.

“They have this pesky lone Democrat that was elected,” Pelath said. “They didn’t expect it and now they have to do something about it and they’re grossly overreacting and they’re showing themselves, I think, to be extraordinarily paranoid and insecure.”

The ten appointed members of the State Board of Education, a group including educators, administrative professionals and lawyers, among others, come from all corners of the state. The superintendent is the only board member who is elected to his or her office and automatically assumes a position on the board.

Ritz says she welcomes the governor’s announcement about CECI’s dissolution, but adds that there is still work to be done.

“While dissolving CECI is certainly welcome news, there are other aspects of the Governor’s legislative agenda that are concerning for public education in our state,” Ritz said in a statement. “I look forward to working with the Legislature and the Governor on the Department of Education’s legislative agenda and other critical issues during the upcoming session.”

The superintendent did not comment on the governor’s decision regarding board chairmanship.