When State Superintendent Glenda Ritz prepared for her presentation before the State Budget Committee Thursday, assuredly there were a number of items on which she expected questions. 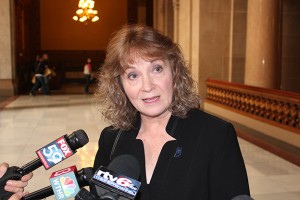 But the item that appeared to take center stage – new state assessments – received a different kind of attention than Ritz was probably expecting.

Ritz outlined the Department of Education’s proposed budged Thursday, which included a request for $65 million for testing and remediation. This is up from $45 million from the last budget cycle.

State education leaders are still in the process of creating a new state assessment to align with the new state academic standards schools began implementing this year. This new system will include a fully operational state-run ISTEP+ test this spring, as well as a second brand-new test to be developed and put in place for the 2015-16 school year.

The State Board of Education is currently still seeking a vendor to write the test for next spring.

“Are we making it too difficult on ourselves?” Kenley asked.

As you’ll remember, this was part of last year’s debate over the Common Core in Indiana. Two consortia of states called PARCC and Smarter Balanced developed nationally standardized tests tied to the Common Core that are being used in participating states for the first time this school year.

Kenley wanted to look for the cheapest action, but what he might not have realized was his question was asking to go back to something the state already abandoned.

The senator added that the General Assembly will have to approve whatever test the State Board of Education ultimately recommends.

“I have to figure out how to get the General Assembly to agree with this,” Kenley says. “It’s been controversial from the start, and I don’t think that’s going to go away.”

Ritz says she won’t speculate on the possibility that the legislature could ask to use a national test in 2015-16, but assures that the vendor chosen this spring will administer an Indiana-specific test.

“Vendors clearly understand that they are aligning Indiana college and career ready standards to an assessment,” Ritz says. “We are developing our own questions in the state of Indiana, however we want to be competitive and make sure that we can measure our students against college and career readiness. We feel we’ll be able to do that with our assessment.”

Ritz also requested that the State Board’s budget be absorbed by the IDOE, now that Governor Pence dissolved the Center for Education and Career Innovation. She told committee members the move would help increase accountability and efficiency.

The budget request also included increased investments for tuition support, $70 million more per year for textbook relief and more money for schools to invest in technology and related training.