We heard earlier this week how the state standardized ISTEP+ test went for students in 2014, and now we know a little bit more about what that test will look like in the next few years. 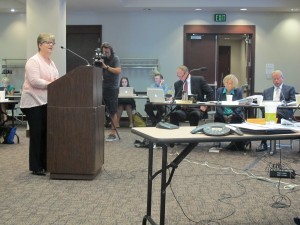 IDOE Director of Assessment Michelle Walker addressed the State Board of Education Wednesday.

Representatives from Indiana’s testing vendor, CTB/McGraw-Hill, updated the State Board of Education Wednesday on the process of designing the new state assessment, which will be first administered in spring 2015.

CTB president Ellen Haley says the test’s design has been selected, and development is currently underway.

The assessment will be aligned with – and only with – Indiana’s new state-specific academic standards, adopted in April after Governor Pence signed legislation voiding the Common Core. CTB will not bring in content items being used in other states, nor will they permit use of Indiana’s test items by other states.

CTB is constructing the 2014-15 assessment to be slightly longer than desired, so they can throw out any questions they deem too tough and select which items will be scored. Afterward, CTB officials, IDOE content specialists and Indiana educator panels will review questions for use on the 2015-16 test based on alignment with standards, content suitability, lack of bias, and technical adequacy.

Despite the fact the test will have all new content, CTB vice president of content development Sally Valenzuela says the organization is taking special caution to match the aesthetic style – formatting certain items to be bold, underlined, etc.- making test items similar to previous versions of the ISTEP+ students have seen in the past.

The IDOE’s Office of Assessment will provide a sample test to teachers in October that they can use as an instructional activity. Director of Assessment Michelle Walker says the training tool will offer teachers and students an opportunity to learn the new technology-enhanced aspects together before testing begins in the spring.

“We want to make sure we’re not measuring how well they can drag and drop next spring,” Walker says. “We really want to measure how well they learned our new standards in ELA and math.”

Prior to that, Walker says her office will offer professional development starting in September.

Just like in past years, students will be tested in two sittings – one in March, and the other in late April.

CTB’s contract in Indiana extends through the 2014-15 school year. The state will have an open bid to operate student testing beginning in the 2015-2016 school year.

Staff members from Indiana’s Department of Administration said Wednesday they now hope to award a contract to design that test by March 2015. They had originally planned to choose a vendor in October.

IDOA representatives anticipate releasing the request for a proposal late next week.

Regardless of whether the state stays with CTB or changes vendors, a vertical scale – the way the state measures student growth – will carry forward.

“I think that’s extremely important because many of the teachers in my district are concerned about what the impact will be to them when we think about high-stakes accountability and teacher effectiveness ratings being tied to measurable student outcomes,” says board member Brad Oliver. “We have to do a good job now of getting the message out that we now know the answers to those questions.”