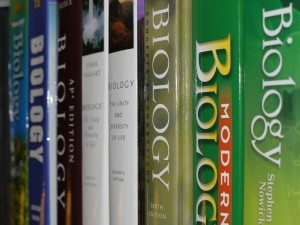 Indiana is one of eight states to charge parents for textbooks.

At the beginning of each school year, families in Indiana’s public schools are hit with bills that include activity fees, class fees and the largest line item- textbook fees. Textbook rental fees cost parents on average about $100 per child.

Frustrating to most parents is the knowledge that Indiana is one of only eight states that charge for textbooks.

That is why state superintendent Glenda Ritz announced earlier this month that she wants to eliminate this financial burden for families.

The Indiana Department of Education’s proposed budget for the next two years asks for $70 million more to put toward paying for textbooks for every Indiana student.

The burden of textbooks on families

“Our textbook fee bills arrived last week in the mail, one per student, and the grand total was over $1,000 for all five of the girls,” Chatterton said. “The higher the grade level, the higher the bill.”

That’s on top of other school fees so her kids can be in band and play on the soccer team as well as the $300 she spent on school supplies. And because of these high fees, the Chatterton’s large family has to make sacrifices to pay for everyone’s fees.

“We don’t typically vacation in the summer as a family but we try to take advantage of spring break or fall break to take a trip, and we’re not doing one of those this fall,” Chatterton said. “Partially because of these bills.”

Charging for textbooks in a “free” school system

It seems counterintuitive that in a public school system, which students attend for free, a family can pay $1,000 in required fees, but it stems from one part of the state’s Constitution:

It should be the duty of the General Assembly to encourage, by all suitable means, moral, intellectual scientific, and agricultural improvement; and provide, by law, for a general and uniform system of Common Schools, wherein tuition shall without charge, and equally open to all.

Kent Frandsen, a lawyer in Lebanon who’s represented school districts for more than 30 years, says that one phrase, where tuition shall not be charged, opens up a door to all sorts of fees a school district can charge.

“The key issue for our discussion here today is what constitutes tuition or what does tuition cover,” he says.

Compared to other state constitutions, such as West Virginia’s, which guarantees a free school system, or Florida’s, which mandates high quality free public schools, Indiana’s Constitution is extremely specific about what the state will pay for in public education. You can’t charge a general fee because that is considered tuition. But you can charge for the child’s books or their participation in extracurricular activities.

IU McKinney School of Law professor Cynthia Baker says the statutes, rules, and individual school district resolutions concerning how schools are funded have become more complicated since the Constitution was written in 1851, when a public school system was a one room school house with desks and chalkboards.

“Now schools have not only things like police officers there, a school safety specialist, using dogs to train to smell firearms and illegal substances, media aids,” Baker said. “A lot of stuff that goes now with what we think about as part of a public education certainly wasn’t an issue in mid-nineteenth century.”

The $70 million question: will a larger budget fix the problem?

In her proposed budget, Ritz asked for a 3 percent increase to cover the cost of textbooks for all students. She says the high cost of technology and resources is creating a divide among Indiana’s schools. With the exception of districts in affluent areas, most classrooms are using outdated materials.

“It’s all about equity. Students, no matter what school they go to should have certain resources available to them,” Ritz said. “We need to have equity wherever a student may attend.”

Right now, the state can only cover a portion of the textbook fees for students who qualify for free and reduced lunch. The 3 percent bump, which shakes out to around $70 million, would completely cover these kids as well as families like the Chatterton’s, who pay out of pocket.

As we’ve reported, Senate Appropriations Chair Luke Kenley said the increase Ritz is asking for is larger than any increase they have granted a state agency the last few budget cycles.

The General Assembly will vote on Ritz’s budget this coming session.

Previous legislatures, dating back to the 90s, have considered eliminating the fee, changing the definition of textbooks to include digital resources and putting a limit on rental fees.