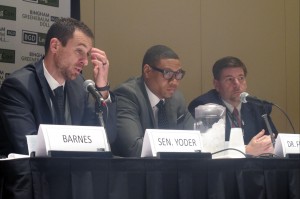 One of the biggest accomplishments from Wednesday’s State Board of Education meeting was a recommendation from the board to the governor and legislature regarding turnaround efforts for failing schools.

The board accepted the recommendation from its turnaround committee to overhaul the way the state intervenes in failing schools.

The recommendation includes a few big changes. First, the board will now intervene after four consecutive years of receiving a D or F, rather than six years of consecutive Fs.

The recommendation was approved with a 9-2 vote, with Cari Whicker and state superintendent Glenda Ritz voting against it, citing issues with certain parts of the plan.

Board member Brad Oliver says the reason he voted for the changes so failing schools don’t get stuck in a pattern of low performance.

“Part of that’s driven out of an ethical obligation to our most struggling learners,” Oliver said.

Turnaround zones will become the new model for improving these schools, rather than finding outside companies to come in and try and work cohesively with a district. This model is currently being used in Evansville with a lot of success, and the board approved the use of this model for Indianapolis Public Schools, which has struggled to make progress under the oversight of lead partners.

IPS Superintendent Louis Ferebee spoke about this opportunity at the BDG Legislative Conference Thursday, saying he expects IPS to make better improvement without a lead partner.

“I think it’s a different way of thinking that’s not ‘command and demand’ and mandate your way into improvement but truly allowing the flexibility and autonomy for the school district to improve student outcomes,” Ferebee said.

One part of the recommendation that Ritz disagreed with is their suggestion to create a group within the board to oversee the efforts of turnaround schools. She says the DOE, which she is in charge of, already has a group conducting this oversight, so it seems to be another instance of the board and Ritz disagreeing over duties.

The recommendation will now go to the legislature and governor for approval, but it probably won’t face much backlash as Governor Pence outlined similar ideas in his legislative agenda, released Thursday.