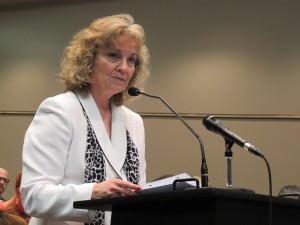 State superintendent Glenda Ritz and members of the State Board of Education focused on turnaround efforts during their monthly meeting in December.

The end of the calendar year means some clarity for the state’s failing schools as to how they’ll move forward with turnaround efforts.

At their meeting Wednesday, the State Board of Education heard recommendations from an outside consultant as well as the board’s three-person committee on School Turnaround.

That committee has spent the fall meeting with leaders from the state’s nine ‘failing’ schools, and compiled a list of options for the board to consider. We’ve already reported about those options, but here’s a recap of the highlights:

The last point proved the most controversial, bringing arguments the board has been having for months over authority to a head. Board members got into a heated exchange with the Superintendent, who said she saw the recommendation as an attempt by the board to become Indiana’s primary education agency – which she argued is the responsibility of her department.

Board member Cari Whicker spoke up to quash that idea.

“I don’t like the generalization that there’s the board and then there’s the DOE,” Whicker said. “They’re so intricately tied together, we could argue about where one starts and where one ends. It’s us versus them, and it shouldn’t be that way.”

Once discussion died down, the board eventually voted to approve the committee’s recommendations. According to representatives from the Center for Education and Career Innovation, the complete slate of ideas will be shared with the general assembly and the governor for consideration.

IPS will also regain control of Arlington High School, whose current TSO plans to drop out at the end of the school year. IPS leaders, in conjunction with Indianapolis Mayor Greg Ballard’s office, will submit a plan by February to make the school part of a new Transformation Zone along with the district’s three other failing high schools – Washington, John Marshall and Broad Ripple.

The board also formally approved Evansville’s Transformation Zone as the state intervention method for Glenwood Leadership Academy, as well as delaying turnaround contracts for two schools in Gary until the community’s school corporation can propose a plan in January.