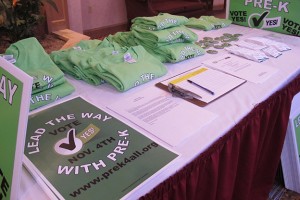 Shirts, signs and stickers are among the items Pre-K 4 All volunteers distribute to community members to spread the word about Bartholomew County's pre-k referendum.

At a recent community gathering in Columbus, hundreds of people are milling about making small talk. Robin Hilber is standing outside, folding a stack of green shirts. Each sports the phrase “Lead the Way With Pre-K.”

Hilber ruffles through the shirts and a few piles of other campaign materials.

“We’ve got yard signs, we’ve got buttons that also have the same logo on them, and then we also have business cards,” Hilber lists. “It’s important to vote ‘yes’ for pre-k!”

Hilber is a volunteer with Pre-K 4 All, a community group working to promote the passage of a preschool-related referendum on this November’s ballot – an issue all too familiar to county residents.

As we’ve reported, the Bartholomew Consolidated School Corporation is asking voters to raise property taxes to fund pre-k for approximately 450 low-income four-year-olds living in the district.

Taxes would increase by 5 cents per $100 of assessed valuation for seven years. That amounts to roughly $16 extra per year for a taxpayer with a $100,000 home. The levy would bring in about $12.6 million dollars to fund scholarships and allow the county’s existing public pre-k program, Busy Bees Academy, to continue operating and even expand.

Residents faced this request before in 2012 when they voted no on the referendum. But this time around, Hilber and her team are campaigning harder; they are putting out yard signs, canvassing neighborhoods and attending community events to get the word out.

“We weren’t quite as vocal, so we’ve decided to go out there and really inform people of the issue,” Hilber explains.

Pre-k is a hot topic across the state, and the renewed interest could help Bartholomew County’s cause. But there is much more for community members to consider.

Besides increased community support, BCSC Superintendent John Quick and others are sure to point out that there’s something else that’s changed this time around. In 2012, state law didn’t allow ballot language to include any description of how the money would be used.

“Last time the question basically said, ‘do you want us to raise your taxes, yes or no,’ because that’s the way the law read,” Quick explains. “All you could do was put in the school name, the number of pennies and the number of years. This question will actually have the word ‘pre-kindergarten’ in it.”

State legislators have since tweaked the language – and Quick says that’s making it easier for voters to understand the purpose of the referendum.

“That was a difficult communication piece in an election that had a governor’s race, a president’s race and a local rep’s race,” Quick saiys. “It was difficult to get that message out.”

“It just lost for the reason that it lost – that people didn’t support it,” Deaton says.

Deaton, a mother of five, voted against the referendum in 2012, and says she plans to do so again this year. She says there are plenty of reasons to do so – ballot language aside. 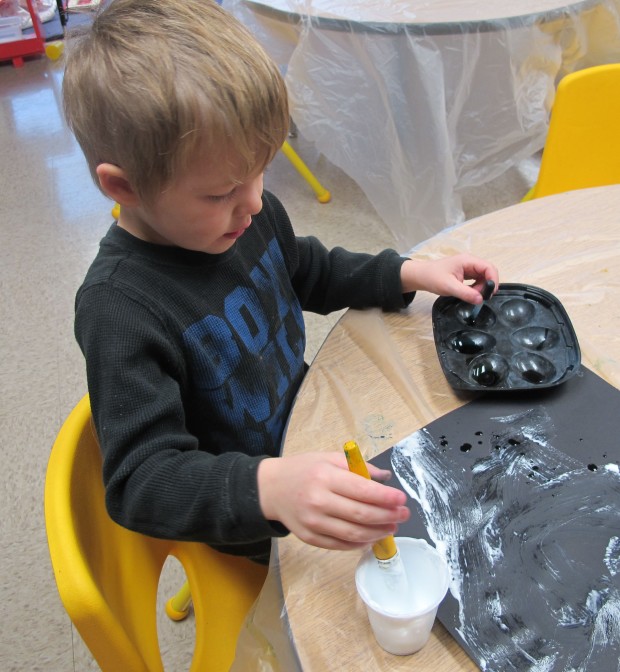 A student uses a large brush and a small eyedropper to create puff paint art at Busy Bees Academy, a public preschool in Columbus.

Bartholomew County already has a number of pre-k programs in place, including a public program operated through the school corporation funded by Title I federal grant money. Students must qualify for the program based on their family’s financial need. Students can attend either a morning or afternoon session, four days a week.

The public school district also started its own pilot program five years ago, thanks to contributions from a number of community businesses and organizations. Because those funders made financial commitments that only last until the end of this school year, district officials say the future of the public program hangs in the balance of this referendum.

That pilot, run out of Busy Bees Academy in Columbus, services roughly 115 kids for five full school days per week. Capacity numbers and schedules have fluctuated in the past – including a scaling back to four days per week when the 2012 referendum failed, and the addition of around 50 kids when the district received money from the state in the form of an Early Education Matching Grant.

Altogether, the public schools serve about 400 of the 900 children that enter school each year.

In addition, Bartholomew County also hosts a number of private and faith-based pre-k programs. Together they serve about 400 of the 900 children that enter school each year.

Lisa Deaton questions why, if existing programs serve a vast majority of district kids, officials want to fund yet another project.

“We have 80 percent of the possible student body that would be interested in this pre-kindergarten type program already being serviced through other facilities,” Deaton says. “Why would we start a whole new program through the school system when we could just assist this other core program?”

But Pre-K 4 All Committee Chair Hutch Schumaker says not all families can afford private education. Half of the 12,000 students currently populating BCSC schools qualify for free and reduced price lunch – and Schumaker says they need help.

“We wish BCSC didn’t have to take a look at this but its those 50 percent of the kids [whose] parents aren’t able to afford to send them to private school,” Schumaker explains. “Those are the ones we need to look out for.”

Seven years ago, the number of students qualifying for free and reduced lunch in BCSC was only 15 percent.

Schumaker adds that its not just those families in financial need who could be negatively affected if this year’s ballot measure fails.

“If the referendum doesn’t pass, the entire BCSC pre-k program is in jeopardy,” Schumaker says. “It will look very different, and it will be scaled back drastically, and that’s what we don’t want to see happen.”

Some opponents also question whether pre-k is actually necessary. Superintendent Quick quashes that with a simple tagline:

“Four is the new five,” Quick quips. “Pre-k is what kindergarten was a generation ago.”

“What we’re seeing in kindergarten, as far as what the standards from the state of Indiana require, are a lot more of what we used to see in first grade,” Heiny says. “[When] they come in we almost expect them to write their name, to know their letters. Some of them are starting to read, to know their numbers. Those are expectations that are kindergarten standards that, a generation ago, were not there.”

Other proponents say that in order to keep kids going down the path to success in higher education and the workforce, the public has to make its investment early.

“From pre-k up through 16 is critically important,” says Chris Lowery, Chancellor of Ivy Tech Columbus-Southeast. “We as a state need to have an adult population with some postsecondary credentials. Children who will be three, four and five years old this next year, before we know it, are going to be headed into high school and then headed into something postsecondary. They’re a big part of the formula of where we need to get to.”

All in the family?

But Lisa Deaton and others question why the public needs to make the investment. Deaton, who homeschooled her two youngest children from the beginning, is of the opinion that parents are best situated to get their kids started. 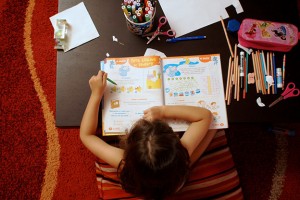 Some opponents of Bartholomew County's pre-k referendum argue that parents are best suited to educate their own children before they enter kindergarten.

Superintendent Quick says this argument has provided some of the greatest pushback he’s seen from the community. He counters by saying that one cannot assume there is somebody in the home – a mother or a father – who has time to work with each child.

“I hear that four-year-olds need to be home with mom,” Quick says. “But mom is not home for the students that we’re talking about,”

Robin Hilber says when she talks to community members about the referendum, she reminds people that enrollment in the proposed program will not be mandatory. Parents from eligible families get to choose whether to send their children.

“If you’re working with your child at home, you don’t need to send them to pre-k,” Hilber explains. “But for those parents who may be working two or three jobs just to make ends meet and don’t have the time to spend with their children, we want to give them that option.”

Columbus isn’t the only community struggling with how to pay for pre-k. There’s discussion in Indianapolis about where money will come from for Mayor Greg Ballard’s plan. Counties in the state’s pre-k pilot program continue to search for funds to match the state’s contributions. On the state level, Governor Mike Pence recently pulled Indiana’s application for a federal pre-k grant, indicating his desire to keep local control.