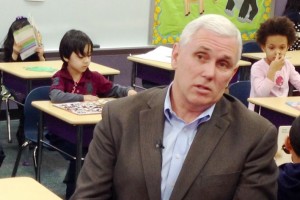 Gov. Mike Pence pulled the state's application for millions of dollars in federal funding for pre-k.

Gov. Mike Pence released a statement this afternoon defending his decision to not apply for a federal grant that could have given the state $80 million to develop preschool infrastructure for low-income three- and four-year-olds.

We reported yesterday that the governor stopped the application process, despite the work the Indiana Department of Education and other state agencies had already done to apply for the money.

The grant was only available to states with little or no state funded preschool for low-income children, making Indiana one of 16 eligible states.

In his statement, Pence said the state can meet Indiana’s pre-k needs without federal assistance.

It is important not to allow the lure of federal grant dollars to define our state’s mission and programs. More federal dollars do not necessarily equal success, especially when those dollars come with requirements and conditions that will not help—and may even hinder—running a successful program of our own making.

An important part of our pre-K pilot is the requirement that we study the program so we understand what works and what doesn’t. I do not believe it is wise policy to expand our pre-K pilot before we have a chance to study and learn from the program.

While accepting federal grant dollars can at times be justified to advance our state’s objectives, when it comes to early childhood education, I believe Indiana must develop our own pre-K program without federal intrusion.

Our pilot program will give Hoosiers the opportunity to assist some of our most vulnerable children while we examine the merits of quality pre-K education. Generous, thoughtful and careful development of new policies for our most disadvantaged kids is the Indiana way.

“Let us contemplate the continued public pronouncements of those who want to take a lot of credit for establishing a modest pre-school program, yet show no inclination for moving beyond the symbolism,” Pelath said in a statement Friday.

But while Democratic leaders expressed disappointment in the decision, Heather Crossin of Hoosiers Against Common Core, the group that lobbied against Common Core Standards because they didn’t want federal participation in public education, penned a blog post praising the decision:

“So powerful is the lure of federal funding that, far more often than not, it’s difficult to find a governor of either party who is willing to say ‘no,'” Crossin wrote. “And yet, that is exactly what is needed – governors who are willing to stand at the constitutional line and reclaim the right of the states to govern themselves – to be responsive to their citizens rather than to the federal government.”

Back in August, when the U.S. Department of Education announced which states were eligible for the grant, state superintendent Glenda Ritz told StateImpact if the state received the money she wanted to use it to put all preschools in Indiana on the same level and work with families.

“Letting parents know, here’s what is expected of children as they enter school and making sure we have a quality preschool program set up. There shouldn’t be a big disparity between programs in which children attend,” she said.

With that federal money off the table now, the state’s new pre-k pilot program is the only state-funded option for low-incomes families and is only available right now in five counties.