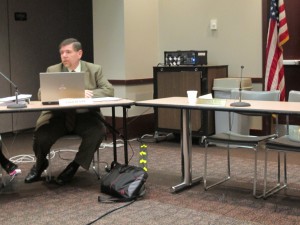 State Board of Education member Brad Oliver seated in the board's meeting room in Indianapolis after state superintendent Glenda Ritz adjourned Wednesday's meeting without a vote of the panel.

After state superintendent Glenda Ritz adjourned Wednesday’s meeting of the State Board of Education without a vote, only the handful of people who remained in the room got to see what happened after she walked out.

The last image those watching the live video stream saw were the blank faces of the board members, who mostly sat quietly as Ritz and her staff filed out.

(For those who want to know what happened after the video feed cut out, find an audio file of the board’s discussion that followed below.)

Ritz left to protest a motion from board member Brad Oliver that she felt would further insert the staff of Gov. Mike Pence’s newly-created education agency in Department of Education business.

Board members weren’t convinced Ritz could stop the meeting without a vote of the panel and were disappointed she walked out. But they also expressed keen awareness of “public perception” and backed down from the motion for the time being.

The above audio begins approximately 20 minutes after Ritz walked out at around 11:10 a.m. Eastern.

Board members conferred with attorneys from Pence’s education agency, the Center for Education and Career Innovation, who recommended board members take a ten-minute recess so they could confer with the Attorney General.

Here are a few highlights from board members’ discussion when they returned from their break at around 11:30 a.m. Eastern. (I’ve included the timecodes so you can find these quotes in the audio yourself, too.)

Speaking to reporters afterward, Ritz said meddling by the governor’s newly-created agency was the source of the problem:

The CECI staff is actually involving itself in board procedures and how we make agendas. They are sending out their own agendas preliminarily to board members, causing conflict and actually creating the agendas in the first place. There’s a lot of conflict, and I attribute it solely — not to the members of the board, actually — but to the CECI staff who have been hired to oversee my agency and how things work. With that said, I hope that we have less involvement from the State Board of Education staff members and more direct involvement with the State Board members themselves.

Pence told reporters Wednesday he “regretted the misunderstandings and the friction” between Ritz, the board and CECI. Later in the day, he posted an op-ed on the Indianapolis Star‘s website:

Hoosiers place a high priority on our schools. They are not well served when politics prevents us from getting the job done for our kids. It’s time to put conflict behind us and work together for the benefit of our kids and their futures.

In the days ahead, I will look forward to working through these issues in a manner worthy of our people with respect and civility. And I invite the superintendent to join us in that effort.