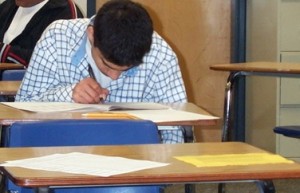 Indiana is switching from the GED to a new high school equivalency exam so adult learners can continue to take a paper and pencil test.

A new high school equivalency exam will soon replace the GED in Indiana.

The Department of Workforce Development announced Wednesday it’s going with a test from CTB/McGraw Hill — the Test Assessing Secondary Completion, or TASC — starting next year.

The same company oversees ISTEP+ exams for the state’s K-12 students. But Frank says he’s not worried about computer glitches such as the ones that slowed test takers this spring.

“A good amount of the folks who take the test are pencil and paper-based test takers,” says Frank. “We’re not going to have hundreds of thousands of people taking the test on the same few days.”

In fact, it’s because of those test takers that Frank says the Department of Workforce Development is moving away from the GED.

As we’ve written before, the GED Testing Service will soon move to an online-only exam. The computer-based test will cost about $120, significantly more than the $70 most Indiana students spend to take the pencil and paper version now.

GED says the increased costs come from new services it will offer as part of the testing bundle, including scoring and data collection.

But Frank says of the 10,000 Hoosiers who take the exam every year, most still opt for the pencil and paper version. He says very few of the adult learning centers that administer the tests and none of the state’s prisons were prepared to make the switch to online-only tests.

“One of the biggest issues about getting folks on a different life path is the education aspect,” says Frank. “They need the ability to offer pencil and paper-based.”

CTB/McGraw-Hill will offer its test for around $55. Frank says in addition to concerns about cost and access, the Department of Workforce Development selected TASC to help measure of college- and career-readiness.

“We really want to make this a robust, rigorous credential so that employers see this as a true high school equivalency,” says Frank.

Even if Indiana had decided to stick with the GED, test takers would have gotten a different exam next year. Robert Moore, director of adult education for the Monroe County Community School Corporation, says there a handful of other high school equivalency exams besides TASC and the GED, but all of them have been revamped in recent years.

The reason? The Common Core, a set of nationally-crafted academic standards adopted by 45 states, including Indiana.

“They really are all moving in that direction,” says Moore. “We would be talking about assessing students at college- and career-level skills, no matter what assessment was going to be used.”

He says Indiana isn’t the only state moving away from the GED.

“The hardest transition really is getting over that name recognition because employers and the military and colleges and everybody in the public generally kind of defaults to GED like they would for example Kleenex referring to facial tissue,” says Moore.

In a statement, a representative from GED wrote the company is interested in working with Indiana education officials to continue offering the credential to students in 2014.

Students who’ve started the GED have until December to finish. Otherwise, they’ll have to start over with a new test.