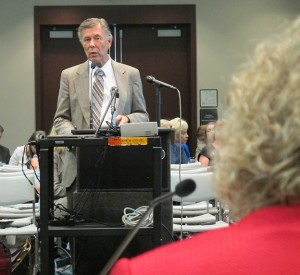 New Hampshire-based testing expert Richard Hill, who chairs the board of the Center for Assessment, addresses the State Board of Education. Hill concluded the vast majority of disrupted ISTEP+ exam scores were valid.

A testing expert told Indiana lawmakers in July that finding a student whose ISTEP+ score went down because of a problem with the website where they were taking their test would be like “looking for a needle in a haystack.”

That expert, the Center for Assessment’s Richard Hill, went through the haystack. On Wednesday, he presented the needles.

Hill asked state education officials to throw out the results of nearly 1,400 ISTEP+ exams — a mere fraction of the nearly 79,000 exams caught up in two separate crashes of CTB/McGraw-Hill’s online testing system.

The recommendation comes roughly one month after Hill unveiled his investigation’s initial finding — that “the vast majority of [Indiana] students scored as well as they would have had the interruptions never happened.”

“We will never, ever know how our students would have performed had we not had the interruptions,” state superintendent Glenda Ritz says.

But Hill says he compared thousands of students’ test scores last year to their scores this year — enough data, he says, to make an educated guess.

“We looked at how students performed on the test relative to how we would predict them to have performed given all the other information we had about them,” Hill explained.

State superintendent Glenda Ritz says the Department of Education will still send a score report to teachers and parents even if the student’s score was invalidated. But if the student’s score in either math or English was thrown out, state officials will put a “V” where their scale score would have appeared.

“That will say, ‘This section of this test was determined to be invalid,’” Ritz says.

Ritz adds state officials plan to release ISTEP data to local schools on Monday. That’s data educators would have otherwise had by the end of last school year, not the beginning of this school year.