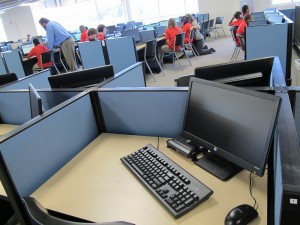 A computer workstation in an Indianapolis charter school.

By this time last year, students had received their ISTEP results and school districts were able to start preparing for next year. But this year, schools experienced outages and delays during the testing window because of server problems at CTB/McGraw Hill, the company that administers the online test.

The delay could cause problems for schools trying to plan for next year.

“I have until June 11 to finish the schedule, so with every day the scores are delayed, it’s that much more trouble with my schedule because we have classes for those students who did not pass the ISTEP Math and ISTEP English/Reading portion,” Hill says. “So I cannot schedule students into those classes until I know who they are.”

The server problems that grounded online testing for large chunks of April 29 and April 30 are also creating more paperwork for administrators.

Monroe County Community Schools superintendent Judy DeMuth says the testing company has sent the district a list of students whose online exams were disrupted. In essence, DeMuth says district officials will have to add any additional students who experienced testing trouble, sign off on the list and, later, determine whether they’ll accept or reject the score. DeMuth tells StateImpact:

That, in my opinion, handles the short-term crisis. Those are the ones that we can see with our data that they were interrupted. But as I tried to point out this evening, all of our students were interrupted in some form or another, because they had to change the time they were tested and constantly juggle their schedules…

In a perfect world, I would like to see that the state of Indiana invalidates all the scores and they say to CTB, ‘You owe us another year on our contract. This has gone awry, it didn’t work, and we’re going to invalidate this.’ The realism of it is that I believe that the scores will be used in the state of Indiana, and we owe it to our students to do the very best we can to get the most realistic picture of those scores. Although I’ll be lobbying our state superintendent to say all children were affected and we really should invalidate the entire state, she has guidelines, laws, policies she has to live by. The realism is when those scores come out, we owe it to our community and our students to make sure [the scores are] as — I hate to use the word “valid,” but I will — as they can be based on this traumatic situation.