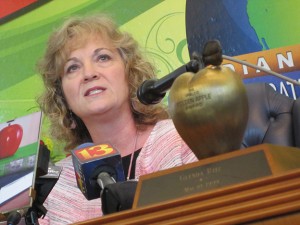 State superintendent Glenda Ritz speaks during a news conference in her Statehouse office.

Six weeks after server problems caused widespread disruptions to Indiana’s online standardized tests, a New Hampshire based group is starting a review of the results to see if the state can use them in its rating systems for teachers and schools.

The National Center for the Improvement of Educational Assessment will conduct the inquiry, state superintendent Glenda Ritz announced Monday, saying she has offered school districts options for minimizing the role of data from the ISTEP exam in teachers’ evaluations.

Testing company CTB/McGraw Hill says more than 78,200 students had their exams disrupted, but some districts say they problems were more widespread than that, and few educators say they can trust the results of the test.

Officials from the state’s largest district, Fort Wayne Community Schools, have already said they won’t accept the results of the test without a third-party review of the scores.

Ritz said the review could take 4-5 weeks and should cost no more than $53,600. She says the incident is proof stakes attached to the test are too high:

ISTEP used to be about student learning, and when it was used for the purpose of students learning, the high stakes were not attached. If that were the case this year, I would’ve contacted CTB. I would’ve said, ‘Would you please reset those testing sessions for the students to take.’ That is not necessarily the case in Indiana, with the high stakes attached to it. We’re dealing with a different situation nationwide. Every year when we give the ISTEP, there’s always a chance that something like this can happen — just the nature of how it’s going to be. I hope the state of Indiana wants to reduce the high stakes attached to this test.

But Ritz added this caveat: