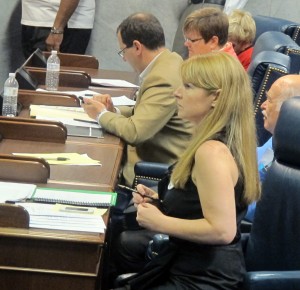 Hoosiers were for the Common Core before they were against it, writes Dan Carden for the Times of Northwest Indiana:

Indiana made Common Core its state standards in 2010. However, many participants at the first of three scheduled meetings of the Legislature’s Common Core study committee seemed to believe Common Core is a new, radical agenda foisted on Indiana schools by the Obama administration.

But spurred by Tea Party chagrin and various Internet conspiracy theories, the Republican-controlled General Assembly this year paused implementing Common Core, making Indiana the first state to do so, and ordered the State Board of Education to reconsider whether Common Core should be Indiana’s educational standard.

We’ve written before that current state superintendent Glenda Ritz is neither for or against the Common Core — a position she reiterated last week at Monday’s legislative hearing.

“It’s not a question for me as to whether we do Common Core or do not do Common Core,” Ritz told the panel of lawmakers tasked with reviewing the standards. “It’s a matter of we’re looking at these standards, are they the right standards, or do we need to change them?”

But Carden’s point is taken. Though many Common Core opponents charge that the new standards were brought in through the back door when the State Board adopted them in 2010, the approval process was the same as it always has been.

Terry Spradlin researches education policy at the Indiana University Center for Evaluation and Education Policy. He says the coalition of teachers, business leaders and community members that make up the Education Roundtable recommended the Common Core to the State Board back in 2010.

Academic standards aren’t new, he points out — though involving the state legislature in their adoption is.

“School corporations, educators locally, the Indiana Commission for Higher Education, the Department of Education, the State Board of Education and the General Assembly — that’s a lot of groups and decision makers and leaders to bring on board and work in unison,” Spradlin told StateImpact. “There may be differing opinions that emerge, but ultimately it is a decision of the State Board.”

Some board members have expressed concern with the state legislature’s intervention in the process.

“The other standards adoptions cycles had been standards Indiana developed that Indiana could change,” says Tuttle. “You cannot change one word of the Common Core standards.”

The next statehouse hearing on Common Core is scheduled for Sept. 10. The discussion will focus on the cost of implementing new standards.